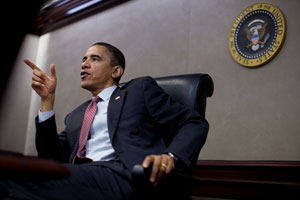 There’s a lot to be pleased with in April’s jobs report. The economy gained 290,000 jobs, the biggest increase in four years. And although the official unemployment rate went up (from 9.7 to 9.9 percent), that’s because some 805,000 people, feeling better about their prospects, resumed searching for work. President Barack Obama called the report “very encouraging news.” Paul Krugman says the report is “good” but then proceeds to rain all over Obama’s parade:

But a long, long way to go. Two things worth remembering. First, during the Clinton years the economy added around 230,000 jobs a month on average — that is, over an eight-year period. One month like this isn’t much. Second, on a reasonable estimate it would take something like 4 or 5 years of job growth at this rate to restore anything resembling full employment.

When you put it that way, the report doesn’t actually seem so encouraging. There are still a ton of people out there looking for work. One broader measure of unemployment, “U6,” which counts people who have stopped looking or are working part-time involuntarily, is at 17.1 percent. That number is going to have to come down if Democrats don’t want to get clobbered in November (and if Barack Obama wants to get reelected).

While Republicans will try to keep Americans focused on the unemployment rate, Dems will want voters to focus on Steve Benen‘s now-famous chart of jobs numbers: 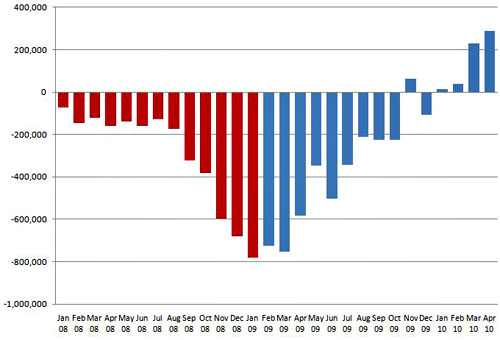 In case it isn’t clear, the chart shows job gains and losses during the Bush (red) and Obama (blue) administrations. It’s powerful stuff. Unfortunately for Democrats, people are much more likely to focus on their own situations than on a pretty bar graph. Today’s job news was good. But it’s going to have to get a lot better to dig us out of the hole we’re in: 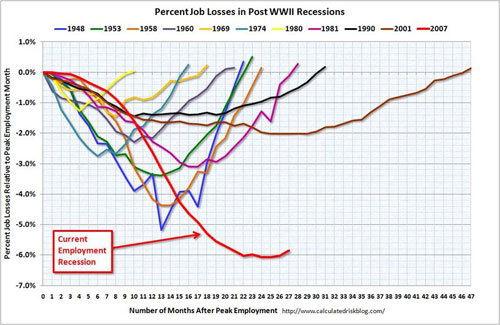 Obama often says that “the arc of the moral universe is long, but it bends towards justice.” Will the arc of the jobs universe keep bending towards full employment? Obama and his party had better hope so.