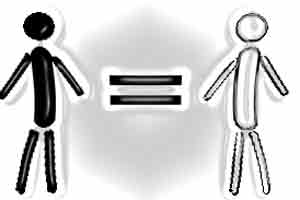 Unveiled today, the new jobs bill is an $85 billion plan aimed at addressing today’s Depression-era unemployment rate by extending jobless benefits and providing health care coverage to the unemployed, which is great. My post on Tuesday listed extending benefits as a measure that could help African-Americans weather the “ethnic recession.” But today the New York Times reported that young unemployed African-Americans is not a demographic on Obama’s radar. He’s taken a post-racial era stance with this issue, which would be great if race did not matter. But as New Deal 2.0 blogger Barbara Arnwine posits, a race-neutral approach to unemployment fails to address the blaring job disparities between black people and white folks in America.  And the Congressional Quarterly‘s Clea Benson offers this solution: national policy reforms that specifically target unemployment among particular groups. Their arguments are buttressed by the fact that “the jobless rate for black Americans has remained much higher than that of whites through good times and bad since at least the 1960s.” And at the start of the recession more than a year and a half ago, the unemployment rate for black men was about the same level as the overall national jobless rate is now.

Algernon Austin, a sociologist at the Economic Policy Institute, told CQ, “We do need to get the whole economy working. But if a 10 percent unemployment rate for black men is what we have in the good times, that’s not good enough. The only way we’re going to get this number to approach or equal the 4 percent for white men is by crafting policies that are explicitly aimed at getting that number down to 4 percent.”