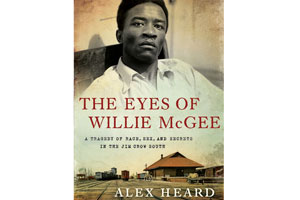 In 1945 in Laurel, Mississippi, a black man named Willie McGee was accused of raping a white woman named Willette Hawkins. Despite inconsistencies in the trial testimony that suggested that Hawkins had fabricated the story to cover up an extramarital affair with McGee, an all-white jury convicted him, and a judge sentenced him to death. In The Eyes of Willie McGee, journalist and Mississippi native Alex Heard tells in fascinating detail how this small-town trial snowballed into a landmark battle of the burgeoning civil rights movement. Communist Party lawyers got wind of the case and took up McGee’s appeal, arguing that his sentence was the result of racism—a white man would never be executed for rape. Over nearly six years of new trials and stays of execution, celebrities including William Faulkner and Norman Mailer advocated on McGee’s behalf. But to no avail: McGee was executed in 1951.

Heard is a great storyteller and a meticulous historian, yet his real triumph was convincing both McGee’s and Hawkins’ descendants that he “wasn’t in this to take sides, push a political view, or set them up to be humiliated.” It’s their tales of how the case affected them that bring this complicated, emotionally charged story to life.