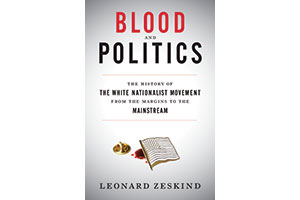 For the past 40 years, white supremacists have lurked beyond the sidelines of American politics, fantasizing about power yet shunning the public eye. In this 600-page doorstop, Leonard Zeskind, a former factory worker and labor organizer who has become a single-minded watchdog of the racist right, offers a blinding dose of sunlight.

Blood and Politics considers contemporary Klansmen, neo-Nazis, and militia members and argues that they are in fact a single movement with a common—if fractious—history. Zeskind tells this story largely through the careers of the dueling “godfathers” of the late-20th-century extreme right, Willis Carto and William Pierce. Since the mid-’60s, Carto has sought to put a respectable face on white nationalism and infiltrate the mainstream with his benign-sounding Liberty Lobby. His archrival, Pierce, author of race-war novel The Turner Diaries, insisted on violent revolution. (He died in 2002.) The two even disagreed on fundamentals such as Holocaust revisionism: Carto is a denier; Pierce hailed the Holocaust as a portent of things to come. Pierce’s book inspired the Oklahoma City bombing and other acts of mayhem, but his National Alliance party crumbled soon after his death. Carto, now in his 80s, has seen his front groups splintered by a series of self-inflicted legal defeats.

Against this backdrop of bickering and violent outbursts, it might be hard to tell if white supremacists are frightening, pitiful, or both. However, Zeskind is emphatic that they should not be written off. He is particularly concerned with their influence on Republican politics. Though he is correct that the social forces and demographic shifts that animate hate groups have also fueled cultural conservatism, he often blurs the meaningful distinctions between the racialist fringe and white Republicans who cynically play racial politics.

Zeskind’s tome doesn’t attempt to predict the white supremacists’ next move. Yet looking at their history, it’s clear that current conditions—immigration, recession, and, of course, a popular black president—could reinvigorate their quest for an impossible future.