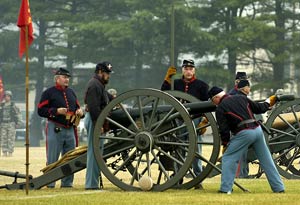 Georgia Rep. Paul Broun (R-Oath Keepers), in addition to spelling his name wrong, also is something of a lunatic. In 2008, he compared the Bush-era bank bailout to “a huge cow patty with a piece of marshmallow stuck in the middle,” which he was “not going to eat.” (Imagine if Eric Cantor had brought one of those to the health care summit!) He was also among the first to warn that then-President-elect Obama might lead us down the slippery slope to a radical socialist dictatorship, using language that would vex even Texas schoolbook purveyors: “That’s exactly what Hitler did in Nazi Germany…he’s showing me signs of being Marxist.” So naturally, when he took to the floor of the House last night to discuss the imminent passage of health care reform, great things were expected. And Broun did not disappoint. In his words: “If ObamaCare passes, that free insurance card that’s in people’s pockets is gonna be as worthless as a Confederate dollar after the war between the states—the great war of yankee aggression.”

It all depends on how the Congressional Budget Office scores it, of course…But I think the news that the health care bill not only covers millions of uninsured Americans, but also apparently frees the slaves, could be enough to win over on-the-fence Democrats.

Distateful though it may be (Lee Fang calls Broun’s language “racial” and “militant”), Broun’s analogy is actually a really fun one. Obama is obviously Abraham Lincoln in this scenario, which is pretty neat. Taking it even further, congressional Democrats (pictured above, “jamming the bill through”) are the Union Army: Harry Reid is Ulysses S. Grant (minus the drinking, of course); Nancy Pelosi is William Tecumseh Sherman; and Joe Lieberman is, of course, George McClellan—infuriating, backstabbing, and incompetent. Who’d I miss? Let me know in the comments.