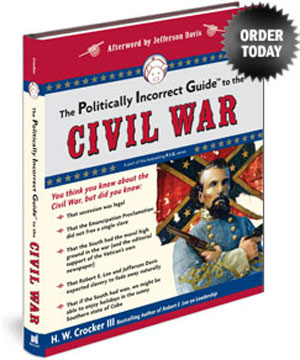 Regnery Publishing, the home of such conservative stalwarts as Swift Boat Veteran John O’Neill (who wrote Unfit for Command, which contained falsehoods about John Kerry) and author Jerome Corsi (who co-wrote Unfit for Command and wrote The Obama Nation, which contained falsehoods about Barack Obama) just emailed me to promote one of their newest releases. This time, it’s The Politically Incorrect Guide to The Civil War, which, you guessed it, reveals how “conventional ‘wisdom’ about the Civil War, slavery, and states’ rights has been hijacked by Northeast liberals.” (Update: I just noticed that the book’s cover, pictured to the right, advertises an “Afterword by Jefferson Davis.”) Among the book’s claims: “How the Confederate States of America might have helped the Allies win World War I sooner,” and, of course, “How, if there had been no Civil War, the South would have abolished slavery peaceably.”

I know it’s probably just because I suffer from the “liberal self-hatred that vilifies America’s greatest heroes,” but I find the idea of the slave states voluntarily giving up their slaves to be really, really dumb. The Southern states seceded largely because they didn’t want to be ruled by Lincoln, who had argued against expanding slavery into new territories. The Confederate constitution says, “No bill of attainder, ex post facto law, or law denying or impairing the right of property in negro slaves shall be passed.” But in case you don’t believe me, I asked retired army Lt. Colonel Robert Mackey, author of The UnCivil War and bona fide Civil War geek. Dr. Mackey, a combat veteran who was Assistant Professor of Military History at the U.S. Military Academy at West Point, says it’s “a heaping pile of bulls**t” and offers up a few reasons why:

1. Slaves represented real property value. The South’s biggest asset wasn’t cotton, it was human beings. That is why the Southern economy collapsed after 1865—old Nathan Bedford Forrest himself said “I went into the war a millionaire and came out a pauper.” Why? All his ‘wealth’ was in slaves.

2. The virtual serfdom of poor whites and blacks in the South after Reconstruction. The entire economic system, which only fell apart because of the Depression and the great migration of blacks to the North in WWI and WWII, was based on sharecropping. Sharecropping only worked because the “New South” replaced antebellum planters with bankers, etc. It was a form of slavery as well—just one in which “the owners” had no moral or ethical responsibility to care for the slave…since they had no ‘property rights.’

3. There is zero evidence slavery would have naturally ended. There was no antebellum abolitionist movement in the South. On the contrary, the entire social system was set up to reinforce slavery.

Lastly, just imagine how easy it would have been for anti-labor industrialists to move factories South, where you not only did not have labor unions, but could contract for workers from their ‘owners’ at a set, low rate. It would have been horror, and the death of any hope of democracy in America.

So I hope that ridiculousness has been suitably debunked. But Civil War “political incorrectness” and Democratic presidential candidate bashing isn’t all Regnery publishes. They also publish non-peer-reviewed “science” written by controversial authors. In 2003, Chris Mooney wrote in Mother Jones about John Lott, a Regnery author whose pro-gun social science came under fire:

Pressed by critics, [Lott] failed to produce evidence of the existence of a survey—which supposedly found that “98 percent of the time that people use guns defensively, they merely have to brandish a weapon to break off an attack”—that he claimed to have conducted in the second edition of “More Guns, Less Crime”. Lott then made matters even worse by posing as a former student, “Mary Rosh,” and using the alias to attack his critics and defend his work online.

Lott’s pro-gun writing for Regnery must have endeared the company to other gun-toting types, because in February, Blackwater founder and CEO Erik Prince signed a book deal with the company. I look forward to the Regnery email promoting “Blackwater’s Politically Incorrect Guide to the Iraq War,” or whatever they end up calling it.

(Mother Jones has covered Regnery many times before. Last year, Debra Dickerson wrote about how some of the company’s authors were suing their publisher for depriving them of royalties. In 2004, Bradford Plumer—now of The New Republic—interviewed Media Matters for America’s David Brock on the subject of the “Republican Noise Machine.” Regnery comes up.)