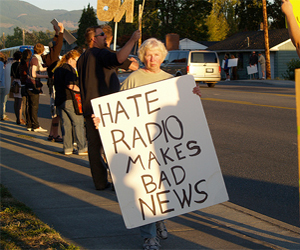 Martin Luther King, Mother Teresa, the Dalai Lama, Reinhold Niebuhr, even Billy Graham: charlatan hucksters. The Southern Christian Leadership Conference? Anglicans and Episcopalians? The Society of Friends? The Catholic priests who stood at the vanguard of the US civil rights demonstrations and world human rights movements? Freedom-hating commies. If you love America, then you must run from them. No less a theological expert than Glenn Beck has spoken.

Beck took the opportunity on his radio and television shows last week to issue his faux fatwah against churches who espouse social and economic justice. His declaration of jihad—wrapped, as always, in fear, loathing, and repetition—is worth quoting at length:

I’m begging you, your right to religion and freedom to exercise religion and read all of the passages of the Bible as you want to read them and as your church wants to preach them…are going to come under the ropes in the next year. If it lasts that long it will be the next year. I beg you, look for the words ‘social justice’ or ‘economic justice’ on your church Web site. If you find it, run as fast as you can. Social justice and economic justice, they are code words. Now, the idea – hang on, am I advising people to leave their church? Yes! (H/T to First Things; full audio is here.)

And just as the universe tends towards entropy, so, too, did Beck’s rant, ending in incoherent bauble about commies and Nazis:

If you have a priest that is pushing social justice, go find another parish. Go alert your bishop, and tell them: “Excuse me, are you down with this whole social justice thing?” And if they say, [faux Southern accent] “Yeah we’re all in that social justice thing!” I am in the wrong place…Communists! In the White House! The communist movement had filled the Madison Square Garden to the rim with cheering communists. They weren’t hiding, they were talking about how great their relationship is with the Democratic Party, et cetera, et cetera…At the same time, the Nazis! Had a convention at Madison Square Garden, and right there on the swastika—they had the big red banners with the white circle and the swastika—and right next to it, a big red, white, and blue American flag banner!

Such idiocy—theodicy, in this case—pretty much speaks for itself. Over at the religious journal First Things, Joe Carter points out that Beck’s blanket condemnation pretty much applies to all Catholics, who are enjoined to perform social justice in their major texts and catechisms. Perhaps that’s one reason Beck—now a practicing Mormon—left the Catholic Church in which he was raised. Ironic indeed, given his similarity to a haranguing Catholic radio priest of yore, Father Charles Coughlin.

My favorite part, though, is Beck’s admonition that “social justice” is code for “communism.” He knows all about code words—he is, after all, the guy who famously told America that President Obama hates “white culture.” And though he couldn’t define it when prompted by Katie Couric, he’s sure right-thinking heartland patriots know what he means…wink wink, nudge nudge, say no more. As always with Beck, the meathead is the message.