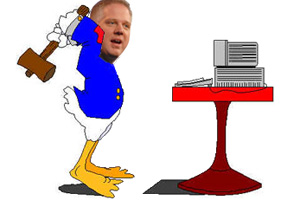 Is Glenn Beck a murderer? No, of course not. But that hasn’t stopped a LOL-seeker from setting up the satirical site Glenn Beck Raped And Murdered A Young Girl In 1990.com to taunt the emotionally fragile Fox host with a dose of his own brand of argument by innuendo. As it explains: “We’re not accusing Glenn Beck of raping and murdering a young girl in 1990 — in fact, we think he didn’t! But we can’t help but wonder, since he has failed to deny these horrible allegations.”

A few weeks ago, Beck sicced his attorneys on the site and asked the Internet gods (i.e., the World Intellectual Property Office) to transfer its URL to him. In a nice twist, his lawyers alleged that the site both rips off Beck’s brand and is “plainly libelous, plainly false” and therefore “is likely to cause confusion for consumers”—presumably consumers who think Beck has set up a site to spread scurrilous rumors about himself. What Beck and his lawyers don’t get is that they’re not trying to shut down a website; they’re trying to shut down an Internet meme. And that’s why they’re about to get a steaming helping of FAIL.

The lawyer for Isaac Eiland-Hall, keeper of the offending domain, calmly lays this out in his response [PDF] to Beck’s complaint, in which he explains how the Beck-is-a-murderer meme got started. Short version: It involved a Gilbert Gottfried routine and and a Fark.com poster who, at precisely 8:32:26 PM on August 31, 2009, posed the loaded question: “Why haven’t we had an official response to the rumor that Glenn Beck raped and murdered a girl in 1990?” A meme was born.

Beck may prevail against Eiland-Hall, but that won’t help him at all. By going after the murder site, Beck’s just giving new life to a one-trick idea that already has a Twitter account, a Twitter hashtag, two Facebook pages, an Encyclopedia Dramatica entry, at least two spinoff sites, and its own shorthand—GB1990. Good luck shutting all that down, even if he wins the URL battle. Before freaking out over what is essentially standard operating procedure for Internet satire, Beck might have considered whether it’s worse to have 1 site saying you’re a criminal or 10,000 saying you’re clueless.