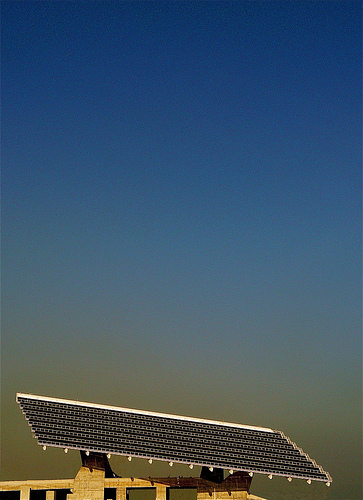 Senators on both sides of the aisle—as well as President Barack Obama—are calling for a massive increase in government-backed loans for nuclear power. In fact, one of the only politicians in Washington who isn’t cheerleading for the industryis Vermont senator Bernie Sanders.

In an interview with Mother Jones on Thursday, Sanders, chair of the green jobs subcommittee in the Senate, lambasted the president’s decision to pour billions of taxpayer dollars into loan guarantees for the nuclear industry instead of other, more cost-efficient forms of low-carbon energy.

“The most expensive-to-produce new energy in America is nuclear,” said Sanders. “The reason our pro-nuclear friends are trying to get the loan guarantees is the private sector is not willing to put money into nuclear.”

Sanders also had some harsh words for some of his GOP colleagues, suggesting that their support for a climate change solution was a disingenuous ploy to win more government handouts for nuclear interests. “Many very conservative Republicans who have never really worried terribly much about global warming are suddenly becoming great environmentalists when it comes to nuclear power,” he said. “Suddenly they are trying to capture the concern about global warming and turn that into a pro-nuclear effort.”

His alternative? A significant investment in solar power. Sanders introduced new legislation on Thursday—called the 10 Million Solar Roofs and 10 Million Gallons of Solar Hot Water Act—which aims to do exactly what the name implies. It would provide rebates covering up to half the cost of new solar systems, eliminating a major barrier to increased deployment of solar power systems, which is the upfront cost. It’s modeled after successful rebate programs in California and New Jersey, which have the first and second most solar installation in the US. The boost for solar would create 30,000 additional megawatts of solar electricity, distributed at homes and businesses around the country.

“One nuclear power plant is perhaps a thousand megawatts, so you need 30 nuclear power plants to do what we’re doing,” said Sanders. “Solar has great potential. It’s becoming more and more cost effective, it’s easy to install, and it can create a whole lot of jobs.”