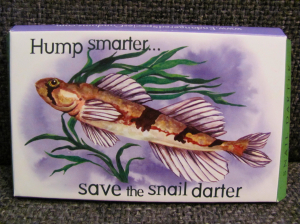 Just in time for Valentine’s Day, the Center for Biological Diversity on Thursday launched a new Endangered Species Condom campaign, to encourage safe sex while raising awareness about overpopulation and the toll humans take on other species. “Extinction is Forever: Wear a Condom,” read the boxes, which contain otherwise unexciting Lifestyles condoms.

I’m not sure if the imminent destruction of a species is what one wants to be thinking of while getting in the mood for love, but hey, they’re educational. In addition to highlighting how funny the term “jimmy hat” is, they also provide a reminder of some oft-overlooked endangered critters, like the snail darter and the coquí guajón rock frog. Some instantly classic slogans:

“Wear a jimmy hat, save the big cat.”
“Cover your tweedle, save the burying beetle.”
“Wear a condom now, save the spotted owl.”
“Hump smarter, save the snail darter.”
“Use a stopper, save the hopper.”
“Wrap with care, save the polar bear.”

Even with funny slogans, the campaign has a serious goal. CBD explains:

At 6.8 billion people, the human race is not only the most populous large mammal on Earth but the most populous large mammal that has ever existed. Providing for the needs and wants of this many people — especially those in high-consumption, first-world nations — has pushed homo sapiens to absorb 50 percent of the planet’s freshwater and develop 50 percent of its landmass. As a result, other species are running out of places to live.

CBD says they will have 3,000 volunteers handing out 100,000 condoms in all 50 states for the holiday. I hope they send some to Washington, DC, where apparently our snowpacalypse has caused a shortage.