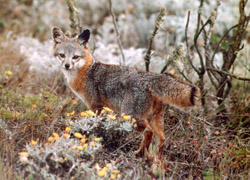 No, Blue Marblers, “Island Fox” is not the name of a new reality TV series. It’s one of many names for a tiny, adorably fuzzy fox that lives on six of the eight California Channel Islands. The Island Fox, also called the Island Gray Fox because of its descent from mainland gray foxes, weighs only 5 lbs as an adult and is just now recovering from near extinction.

The Island Fox has lived on the Channel Islands for thousands of years, with each island evolving its own subspecies. All the Island Foxes were thriving until the 1990s, when changes in the local ecosystem had a disasterous chain effect on the species. DDT poisoned fish, which in turn poisoned the Islands’ native bald eagles. The bald eagles’ population decline opened up turf for non-native golden eagles who were attracted by the Islands’ feral pigs. Once on the Islands, the golden eagles found Island Foxes easy prey since the foxes never had a predator, much less one that struck from above. In addition, sheep and other livestock had eaten much of the protective scrub and grasses foxes might have used for cover. Golden eagles quickly decimated the foxes. On one island, the fox population plummeted from 450 animals to 15 in just a few years.

To bring back the species, the National Park Service instituted a number of measures. Firstly, they removed golden eagles and re-introduced native bald eagles. Secondly, the Service created an ambitious captive breeding program, which you can learn more about here. And thirdly, the department is working on totally eradicating feral pigs so that golden eagles do not come back. Through this multimillion-dollar, multi-pronged approach, the National Park Service has been successful in bringing the Island Fox back from the brink of extinction in record time.

Now that Island Fox populations are recovering, the diurnal animals can be seen on the Islands living naturally. The foxes eat mostly fruit, insects, and deer mice and are devoted parents. They mate for life, having two to three pups per litter. Foxes communicate not only with body language, but with growls and short, high-pitched barks. Although they are now the subjects of active conservation, the foxes remain federally endangered. To learn more about the Foxes, and learn more about their history, you can visit the National Park Service’s page here or visit a conservancy organization here.