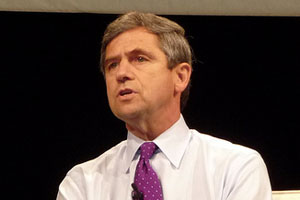 Photo used under a Creatives Commons license by Flickr user <a href="http://www.flickr.com/photos/progressohio/">ProgressOhio</a>

The press release for Choi’s endorsement was reprinted on the blog Pam’s House Blend:

“Putting the Army-Navy rivalry aside, I’m here to support Joe Sestak,” Choi said. “Joe understands that equal rights for gay and lesbian people is the civil rights test of our generation. As the highest ranking Veteran ever elected to Congress, he spent 31 years serving our country in the Navy fighting for our rights. He has been a leader in working to end “Don’t Ask, Don’t Tell,” and as Pennsylvania’s next Senator, Joe Sestak will continue to put principle over politics.”

Frank, who is the first member of Congress to back Sestak, also said at a Philadelphia press conference yesterday that he admires Sestak’s stance on “Don’t Ask, Don’t Tell.”

Sen. Arlen Specter (D- Pa.), who Sestak will challenge this November, also opposes the policy and recently called for repeal of the Defense of Marriage Act (even though he voted for it in 1996). However, some of Specter’s colleagues, Barney included, have criticized his party switch from Republican to Democrat earlier this year. In his endorsement, Frank pointedly called Sestak a “true Democrat,” and added “I have to say I don’t think it did our profession any good for [Specter] to announce that he switched parties purely so he could survive.”

Specter helped the Democrats secure their 60-seat majority in the Senate, but with members of Congress suggesting his party allegiance is disingenuous, I wouldn’t be surprised to see Sestak keep gaining momentum in his drive to overtake Specter in the 2010 election.

While we’re on the subject of “Don’t Ask, Don’t Tell,” see yesterday’s Q&A with author and researcher Nathaniel Frank.