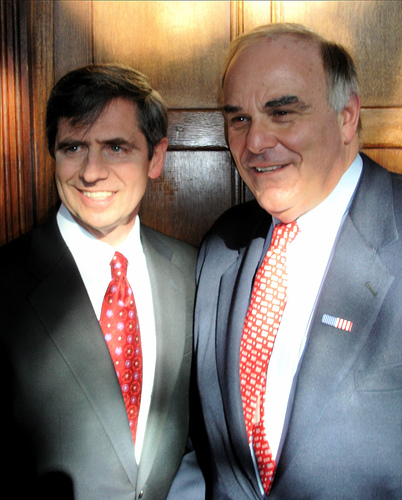 Used under a Creative Commons license from Flickr user EAWB

In 2006, when recently retired Naval Admiral Joe Sestak announced his candidacy to represent Pennsylvania’s seventh congressional district, he knew he’d be fighting an uphill battle. He was a Democrat and a political newcomer facing 10-term GOP incumbent Rep. Curt Weldon in a traditionally conservative district. But first Sestak bested his opponent in the fundraising race, and then he beat him at the polls, becoming only the second Democrat to win that seat since the Civil War. On Tuesday, after serving for little more than two years in the House of Representatives, Sestak announced that he would run against Sen. Arlen Specter in the Democratic primary.  Can he defy the odds once again?

Well, maybe. But it won’t be easy. When Sestak pulled off his upset victory over Weldon, he was helped by the fact that his opponent was the target of an FBI investigation. Specter, by contrast, is a 30-year incumbent with some major Democratic heavyweights standing behind him—including President Barack Obama; Vice President Joe Biden, who helped broker his party switch; and Pennsylvania Governor Ed Rendell. So far, the only big(ish) Pennsylvania pol to jump on board for Sestak is Joe Hoeffel, the former congressman and current vice-chair for the Montgomery County Board of Commissioners, whom Specter defeated in the 2004 election.

Specter also has a huge name recognition advantage, years of Senate experience to sell to Pennsylvania voters, and a long track record of appealing to both independents and moderates. Sestak, by contrast, isn’t a household name outside his district.

Still, the news isn’t all bad for Sestak. For all of Specter’s many years in politics, he’s not crushing Sestak in the fundraising battle. In the last quarter, Sestak hauled in $1 million compared to Specter’s $1.7 million—but Specter has pledged to return contributions from GOP supporters who no longer supported him after he switched parties.

The big wild card in this race is the shifting allegiances of Pennsylvania voters. James Carville once memorably said that Pennsylvania is Philadelphia and Pittsburgh with Alabama in between. But there are now 1.2 million more Democrats than Republicans registered in Pennsylvania. At least some of those are newcomers to the party who were formerly moderate Republicans, Specter’s traditional support base. Be prepared for this fight to get ugly.