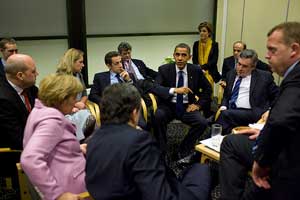 Late on Friday at the climate summit in Denmark, President Barack Obama announced the Copenhagen Accord, an eleventh-hour deal with the United States, China, India, Brazil and South Africa that broke a seemingly intractable impasse in the negotiations. But after the president boarded Air Force One—hoping to reach Washington before an approaching snowstorm—negotiators for 193 countries fought bitterly about the agreement through the night. In the small hours, a handful of nations—including Venezuela, Bolivia, Sudan, and Nicaragua—refused to sign the pact. Exhausted negotiators, some looking ready to keel over at any minute, railed and pleaded to no avail; a Venezuelan delegate even cut her hand to emphasize her opposition to the deal. In the end, the holdouts could not be won over, and so the summit’s final statement does not adopt the Copenhagen Accord, but merely “takes note” of it. What does this nebulous pact actually mean—and what happens next?

The first big disappointment of the conference was that it failed to produce even a non-binding pact that everyone could live with—and this breakdown threatens the entire international climate process that was established with the 1992 Earth Summit in Rio de Janeiro and which produced the Kyoto Protocol in 1997. Obama’s agreement was bartered after he burst in on a private meeting among leaders of China, India, South Africa and Brazil, without the participation of the remaining 188 members. There was no formal UN sign-on of his accord (the Danish host government has agreed to coordinate official approval in the coming weeks). But because the document was not adopted unanimously, it has no real legal or formal bearing—it may never play a role in future UN deliberations. “We need to be clear that it is a letter of intent and is not precise about what needs to be done in legal terms,” said Yvo de Boer, executive secretary of the United Nations Framework Convention on Climate Change (UNFCCC). “So the challenge is now to turn what we have agreed politically in Copenhagen into something real, measurable, and verifiable.”

But converting this accord into meaningful action will be torturous. For all the angst the document provoked, it is extremely vague and leaves many key details unresolved. The accord states that there should be a goal to keep the average rise in global temperature to below 2 degrees Celsius. However, the text contains no targets for emissions cuts that would actually achieve that target. (Drafts circulated earlier on Friday had called for a 50 percent cut in global emissions by 2020, with 80 percent of those cuts to be made by developed nations, but those figures were stripped from the final text.) This makes the 2-degree temperature goal virtually meaningless. Even the portion of the document that is supposed to list existing domestic commitments was left blank—leaders were given until February 1, 2010 to include them in an appendix. And even if those modest commitments are formalized, they will put the world on the path to a 3-degree Celsius temperature rise, according to a UNFCCC analysis leaked to the press last week. A 3-degree rise would pose significant threats to African and small island nations, who contend that an agreement allowing a temperature increase of more than 1.5 degrees would amount to a suicide pact in light of the latest IPCC findings.

After two weeks of grueling negotiations, the conference’s only genuine advance was on the issue of financing to help developing countries cope with climate change. Industrialized nations indicated that they would raise $10 billion per year for three years in so-called fast-start funding and long-term funds of $100 billion per year by 2020. But again, major blanks were left to be filled in later. The document doesn’t say where the annual sum of $100 billion will come from or how the money will be distributed. And on another key front—convincing China to sign on to independent monitoring of emissions cuts—there was no real progress at all. The language explaining how emissions reductions would be verified and reported is more of a linguistic contortion than a plan of action.

Given the accord’s many omissions, none of the participants were happy with the conference’s outcome. Many key players supported the deal only grudgingly, hoping to prevent the summit from ending in complete failure. (It probably helped that access to the $10 billion annual fast-start financing hinged upon signing the deal.) Even Danish Prime Minister Lars Løkke Rasmussen, the summit’s official cheerleader, offered a tepid assessment: “I am satisfied. We have achieved a result.”

“I will not hide my disappointment regarding the ambition in terms of the binding nature or non-binding nature of the future agreement,” said José Manuel Barroso, president of the European Commission. “On this particular point, the text agreed today falls far short.” EU officials had previously said they would be willing to cut their emissions by 30 percent cut below 1990 levels by 2020. But the lack of significant commitments by other nations led the EU to opt for a more modest 20 percent cut instead. And the circumvention of traditional UNFCCC protocol angered developing nations, who see the forum as one of the few places they can be heard. “They have excluded poor and vulnerable countries. Those countries were put under extraordinary pressure to sign a deal with Obama,” said Kate Horner, a policy analyst at Friends of the Earth and an adviser to the Bolivian delegation.

Some environmental groups are arguing that the one bright side of Copenhagen’s ambiguous endgame is that it may lend a boost to the cap-and-trade bill in the Senate. The Obama administration was able to lock in one of the most important elements for the Senate: the cooperation of major emerging economies like China and India. At the same time, it did not prescribe specific actions for the US, leaving room for the Senate to develop their bill. “This puts it in the hands of the Senate to set the terms of engagement,” said Fred Krupp, head of the Environmental Defense Fund. “That’s what the Senate wants.”

Yet overall, many agreed that the prospects for tackling the problem of climate change via the United Nations process seem very grim. Although Obama said on Friday that he and other leaders remain committed to a new, legally binding treaty in the future, there is no road map or timeline in the accord to reach such a goal. The document also discarded the road map to a Kyoto successor that nations agreed to at the summit in Bali in 2007. Further work towards a deal within the UNFCCC will be put off until a two-week negotiating session slated to begin on May 31 in Bonn, Germany. The next high-level summit will be held in Mexico City in the end of November, 2010.

Carl Pope, executive director of the Sierra Club, told Mother Jones, “The relationship between the United States and the world is simply broken, and that being broken has consequences. A lot of Americans may have believed that Barack Obama is really different, and that wiped out eight years to the rest of the world. I think it’s turned out it didn’t.” And Phil Bloomer, director of campaigns and policy at Oxfam, lamented in a Friday night press conference that many nations were still approaching the issue of climate change not as a dire challenge that will, sooner or later, affect every nation, but instead were seeking to address their own narrow domestic concerns. “It’s clear that the current dynamics of the negotiations don’t work,” he said.