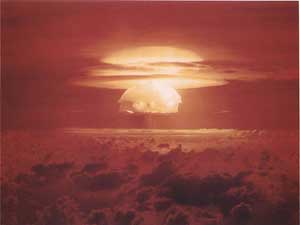 In his post, reflecting on the fleeting chance of a global climate agreement, Nick writes, “there simply isn’t much precedent in human history for comprehensive global agreement on tough issues.” I disagree. As the Montreal Protocol to prevent the depletion of the ozone layer and the tattered Nuclear Non-Proliferation Treaty have (thus far) proven, when the world has a profitable solution or nuclear-armed gun to its head, it can agree to do the right thing.

The effort to close the polar ozone holes is an imperfect but instructive global success story. The ozone hole was caused by one type of industrial chemical (chlorofluorocarbons) with limited commercial applications. A profitable replacement chemical made the shift to a planet with fewer CFCs comparatively easy. Climate change is vastly more complicated but there are still ample opportunities for profit from the reworking of the world economy, which is required to prevent widespread catastrophe.

The world succeed in avoiding a nuclear holocaust largely because of a military doctrine known as “mutually assured destruction” (the acronym of which was, appropriately enough, “MAD”). One problem with global warming is that while climate chaos is assured, it will be unevenly distributed across the globe. As African negotiators in Copenhagen have pointed out to little avail, countries in the global south will bear the brunt of the effects of global climate change—despite little historic responsibility for the greenhouse gas emissions that are slowly baking the globe. The disproportionately assured destruction climate change will produce weakens the negotiating positions of these already disadvantaged nations. Case in point: developed nations secretly negotiated for a politically acceptable agreement to only raise global temperatures by 3 degrees Celsius—a scenario that would turn southern Africa into a massive desert.

Indeed, avoiding nuclear war is easier than halting climate change. For starters, fewer nations are in possession of nuclear warheads. Although a troubling number of nations of have joined the nuclear club in recent years—Israel, India, Pakistan, North Korea, and, if it continues on its current path, Iran—it remains easier to discuss nuclear non-proliferation than it does cutting the use of fossil fuels, which have powered the world economy for much of the last 200 years. Furthermore, when a nuclear bomb wipes out an entire city, there is no denying the explosion. The scientific and economic cases for combating climate change are rock solid, but the fear factor is not the same. Flooding and severe storms happened before scientists documented global warming and snow will continue to fall (somewhere) in a hotter, more dangerous world. Short of a hurricane wiping out New York or Beijing, it is difficult to imagine a universal consensus committed to stopping climate change on par with sentiment opposing nuclear war.

Although repairing the ozone hole and avoiding nuclear war prove that international agreement is possible, it is clearly no easy task. For the world to collectively combat climate change, international leaders must establish conditions where where someone can profit or everyone is exposed to massive, previously unimaginable destruction. Unfortunately, with the Copenhagen climate summit winding down, it is the latter option that seems more likely.