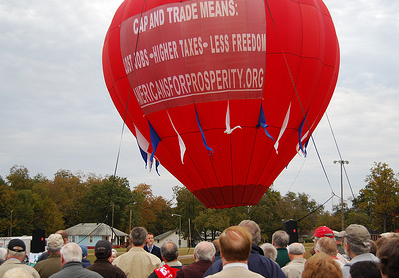 Americans for Prosperity, a “grassroots” group funded by a dirty energy conglomerate, has been travelling around the US this year to protest cap and trade legislation. Next week, it’s taking its show to Copenhagen.

AFP President Tim Phillips and policy director Phil Kerpen will be broadcasting live from the United Nations Climate Change Conference on the day that Barack Obama plans to attend the summit. They worry that the US is bowing to “international ‘green’ pressure,” said Phillips in a press release, and intend to call attention to “international global warming alarmism.”

AFP’s “Hot Air Tour” has made 75 stops in the US to date, complete with an actual hot air balloon. But this is the group’s first foray into an international forum. Christopher Monckton, one of the world’s more zany climate change deniers, will be joining Phillips and Kerpen. (See also this piece I wrote about Monckton’s appearances before Congress earlier this year.) And for those back home in the US, AFP is also planning “grassroots” viewing events around the country.

But there’s nothing particularly “grassroots” about AFP. It’s funded largely by Koch Industries, the oil and gas industry giant. Back when the organization was known as Citizens for a Sound Economy Foundation it also received money from ExxonMobil, before changing its name in 2003.