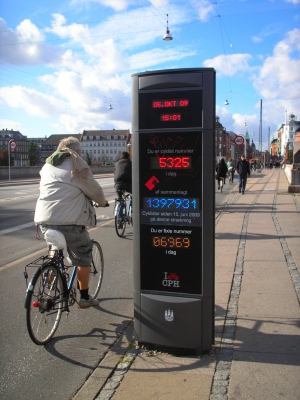 Back home in Washington, DC, I like to consider myself somewhat of a rebel, a risk-taker perhaps, because I commute by bike. DC doesn’t have the greatest bike lanes (and in many parts of town, no bike lanes at all), and we have more than our fair share of aggressive drivers. Biking to work in the city does tend to offer some insight into one’s personality—or at least their political and environmental inclinations. As Matthew Yglesias, who is also on this trip this week, points out, bikers back home identify with a bike culture and feel a common bond to others who bike to work. We’re rogues in the District, totaling just 2.3 percent of commuters.

But here in Copenhagen, it seems these bike identity politics are somewhat provincial. And, after spending the afternoon with Lise Bjørg Pedersen, the political director of the Danish Cyclists Federation, I no longer feel quite as hardcore for biking. Seven years ago, Pederson traveled by bike to the hospital to give birth to her son. She wasn’t peddling—that task fell to her boyfriend, she said – but she was riding in a giant bike cart padded with pillows. It was only three kilometers to the hospital, she said—not worth calling a cab.

Biking to the hospital to give birth, and biking babies around town post-birth, isn’t all that uncommon here. Pretty much everyone bikes, and fairly often, so biking is not at all viewed as a lifestyle choice or a political statement. In 2008, 37 percent of all trips to work or school in Copenhagen were taken by bike. The city houses more bikes than residents, at 560,000 bikes to 519,000 people. They’re not just for commuting—many use cargo bikes, like the one Pedersen rode to the hospital, to transport children and goods. The Danish government reports that 25 percent of families in Copenhagen with two or more children have a cargo bike that they use to haul everyone around town.

While they’ve long been a biking city, ridership has increased 26 percent in the last 10 years. The city has set a goal of increasing ridership to 50 percent by 2015, and has been scaling up the infrastructure to make that possible. This year, the Danish government agreed to invest $200 million in bike infrastructure and promotion over the next five years, part of their “two-thirds green, one-third black” transportation policy—meaning that the majority of public funds will go to bike and public transportation options. The city already boasts 397 kilometers (about 247 miles) of bike lanes or designated bike routes in the Copenhagen metropolitan area.

While I was taking photos of all these bikes this afternoon, the 5,325th bike of the day passed over a bridge in downtown. It was the 1,397,931th bike to pass by since June 15, 2009. This was made apparent by a giant ticker that the city government recently installed, intended to instill more public confidence in the safety and dominance of bicycles.

Of course, I wondered what helped lead to a point where biking is so widely accepted as a safe and efficient form of transportation, a point where one would no longer feel like an exception for biking. Pedersen’s explanation was that the government investment in making designated lanes—separate from traffic and only for bikes—was the dominant factor.

“You need infrastructure. If you don’t have cycle lanes where people feel secure, they will never go there,” said Pedersen. And so far, the investments have paid off, she said. A consistent majority of Copenhagen residents rate biking as a safe method of commuting, something I’d never say about DC, despite doing it daily.

There’s also an increasing awareness of bikes as a public health benefit, said Pedersen. Health care activists were key players in getting the $200 million set-aside for bicycle infrastructure, touting the lower rates of diabetes and heart disease that result from increased physical activity. The government estimates a 30 percent lower mortality rate for adults who commute by bike, compared to their others who resemble them in all other ways. This in turn saves the government a significant amount on medical care, which is even more relevant in a nation with socialized health care. The government estimates that there is a “a clear gain for society” of approximately 24 cents per cycled kilometer.

“It’s the cheapest and easiest way to keep Danes active on a daily basis,” said Pedersen.

As a result of their widespread use and acceptance, Pedersen says there’s isn’t really an identity tied to biking. She wouldn’t even consider herself a “cyclist,” per se, and she’s the head lobbyist on the issue.

It would take a lot of time, and significant political will, for the US as a whole to adopt this level of investment in bicycle infrastructure. Which is fine, since I’m not quite ready to give up my identity as a bicyclist just yet. But I will say, it was nice traversing the city with significantly less fear of death.