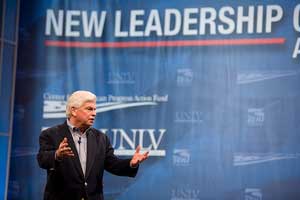 Photo from the <a href="http://www.flickr.com/photos/americanprogressaction/">Center for American Progress</a> via Flickr

Something very strange has happened to Sen. Chris Dodd. As Washington finally moves to address problems in the financial system, the White House is proposing only a modest shakeup of the existing regulations. The legislation that Rep. Barney Frank is spearheading in the House isn’t much more ambitious. But Dodd, the Democratic chair of the Senate Banking Committee and long known for his deep Wall Street ties, is suddenly pushing for reforms that sound like a populist’s wish list.

Dodd wants to strip the Federal Reserve of its authority over banks. He wants to merge America’s scattershot collection of banking regulators into a single entity. And he doesn’t want the Fed to take on the new job of monitoring systemic risk to the economy; he prefers to hand this task to a new council of regulators. These are bold suggestions. Is Chris Dodd really willing to take on Wall Street? Or is he merely championing reforms that sound impressive but have no chance of passing?

Give Dodd his due. This year he sponsored a major credit card reform bill and successfully muscled it through the Senate. Although critics said it didn’t go far enough, it does provide consumers with new protections against predatory lending practices. Dodd is also on record supporting the financial reform most eagerly embraced by progressives and vigorously opposed by banks: the creation of a Consumer Financial Protection Agency, a sort of product safety commission for loans, mortgages, and other financial products.

But there’s also another possible explanation for Dodd’s new role as crusading reformer. In his bid for reelection next November, the five-term Connecticut senator is trailing in the polls, due in no small part to the perception that he’s too close to Big Finance. As Mother Jones reported in April, the financial services industry was Dodd’s leading source of campaign cash in the first quarter of 2009—and only five Connecticut residents contributed to his campaign fund during that period. Dodd has also been battered by the report of his VIP loan from now defunct Countrywide Financial. Yet a Connecticut campaign means buying ads in the expensive New York City media market. Wall Street is perhaps the only place Dodd can raise that kind of cash. Somehow, he needs to distance himself from his biggest backers without alienating them. All this raises suspicions that Dodd’s newest proposals are so ambitious that they have no chance of passing—and Dodd knows it.

For instance, Dodd reportedly wants to merge the four bank regulators—the Federal Deposit Insurance Corporation, the Fed, the Office of the Comptroller of the Currency, and the Office of Thrift Supervision—in order to prevent banks from shopping around for the most permissive rules. It sounds good, but it’s “just not going to happen,” says Dean Baker, codirector of the left-leaning Center for Economic and Policy Research. Not only is the banking industry already fighting this proposition, the regulators themselves oppose it. “All the political force is against this actually happening,” says Mark Calabria, the director of financial regulation studies at the libertarian Cato Institute. Dodd’s office didn’t respond to a request for comment, but he has publicly acknowledged the uphill terrain. “The most common argument is not that it’s a bad idea—it’s that consolidation is too politically difficult,” he has said. “That argument doesn’t work for me.”

In fact, Baker believes Dodd is fully aware that his proposals are doomed. “He’s kind of playing games,” he says. “I think he wants to look tough.” An example is Dodd’s plan to take systemic risk regulation away from the Federal Reserve. Bashing the Fed has a lot of political appeal right now. But Baker says that Dodd’s reform is essentially meaningless: Since the Fed is America’s central bank, it will play a general oversight role whether it officially has systemic risk powers or not.

Dodd’s counterparts on the House Financial Services Committee have reached a similar conclusion. “The Federal Reserve is very unpopular,” says Steve Adamske, the spokesman for House financial services chairman Rep. Barney Frank (D-Mass.). “If the Federal Reserve was running for reelection, it would be going to spend more time with its family.” But because the Fed has the market expertise, Adamske says, “we don’t have a choice” but to involve it.

Peter Wallison, a former general counsel at the US Treasury and a fellow at the conservative American Enterprise Institute, likes some of Dodd’s ideas better than the administration’s “truly bad” plan, but agrees they’re probably dead on arrival. “It’ll be a very tough go. I can’t really believe that he thinks he can get it done by 2010.”

But maybe getting it done by 2010 isn’t the point. Dodd is up for reelection that November. If he manages to win by talking populist while raising money from Wall Street, he’ll have plenty of time afterward to figure out what to do next.