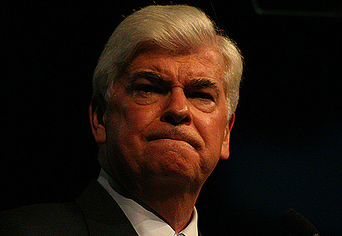 As Senator Chris Dodd fights for his political career, the embattled chairman of the powerful Senate banking committee is receiving his own economic rescue package from the finance industry. According to the five-term senator’s latest campaign disclosures, filed earlier this week, the financial sector is flooding Dodd’s campaign war chest with donations in advance of what is expected to be a tough reelection bout.

Dodd, who’s had a rough year, can certainly use all the support he can get. Last summer, the news broke that he had received two sweetheart loans through subprime lender Countrywide’s “V.I.P.” program. And in March, Dodd first denied and then later admitted that he had inserted language into the economic stimulus bill that would allow AIG executives to keep their bonuses. Amid accusations that he has grown too chummy with the industries he oversees as head of the banking committee, Dodd has seen challengers to his 2010 reelection crop up on his left and his right. Recent polls show him with a popularity rating of just 33 percent in Connecticut, losing in hypothetical matchups with three different Republicans. Political handicappers consider him the most vulnerable Democratic incumbent in the Senate; the GOP is raring to pick him off.

Despite his waning appeal in Connecticut, Dodd’s fundraising effort picked up steam in the first three months of 2009. He raised just more than $1 million during the quarter, according to federal campaign disclosure records. Almost a third of that money—at least $299,000—came from banking and investment executives, financial industry trade groups, and finance-oriented political action committees (PACs). An additional $68,000 came from lobbyists, many with clients on Wall Street. And that doesn’t count the formidable financial support Dodd has received from insurance and health care interests.

It’s not unusual for the chairman of an influential committee to haul in loads of campaign cash from the businesses that are within his committee’s jurisdiction. But with his future in the Senate in jeopardy, Dodd truly has to rely on his supporters in the industries he oversees, all while presiding over key components of the various financial bailouts currently under way. That is, he’s pushing the envelope when it comes to Washington’s pay-to-play routine.

Financial industry PACs were particularly generous to Dodd. PACs controlled by UBS and Ernst & Young each chipped in $5,000. The Mortgage Bankers Association added $4,500. H&R Block gave $3,000. Goldman Sachs, Vanguard, Charles Schwab, and US Bank kicked in $2,000 each. And the Futures Industry Association and the Independent Community Bankers of America donated $1,000 a piece.

Among Dodd’s donors is a who’s who of finance industry heavy hitters. They include Leon Black ($2,400), the billionaire founder of private equity firm Apollo Management; Mark Fetting ($2,000), the chairman and CEO of asset management firm Legg Mason; Alan Leventhal ($1,500), chairman and CEO of Beacon Capital Partners; and Rodger Lawson ($2,300), the president of mutual fund giant Fidelity Investments. (Along with Lawson, at least a dozen other high-level Fidelity employees donated $1,000 or more to Dodd, and the company’s PAC gave $5,000.) Also appearing on Dodd’s donor list are dozens of top executives at various firms including Citigroup, Citizens Financial Group, and D.E. Shaw & Company, the New York-based hedge fund.

After his industry backers, one of Dodd’s largest donor constituencies is Washington lobbyists. Ogilvy lobbyist (and one-time chief of staff to Sen. Kit Bond of Missouri) Julie Dammann, whose finance industry clients have included the private equity firm Blackstone Group, AIG, Visa, and Fannie Mae, contributed $1,000. So did lobbyists Thomas Quinn and Jeffrey Kurzweil, who are both on the payroll of Beacon Capital Partners. (In 2008, Quinn also lobbied for Bear Stearns, the National Association of Credit Unions, and State Street Corporation, among other finance sector clients.) Former Dick Gephardt aide Steve Elmendorf, whose firm has recently lobbied for Citigroup, Ernst & Young, the Managed Funds Association, and other financial clients, donated $2,400.

Dodd, who in 2007 blasted the “predatory, abusive, and irresponsible” practices of subprime lenders, also received campaign money from one of the subprime industry’s chief lobbyists, Wright Andrews ($1,000). Andrews has run several cleverly named industry-backed trade groups, including the Coalition for Fair and Affordable Lending and the Responsible Mortgage Lending Coalition. Along with his wife, Lisa, once a chief in-house lobbyist for Ameriquest Mortgage, which shut down in 2007, Andrews “coordinated” the subprime industry’s lobbying campaign to blunt state efforts to crack down on risky lending, according to the Wall Street Journal.

Asked about Dodd’s extensive contributions from Big Finance, Bryan DeAngelis, the senator’s press secretary, insisted Dodd was not in Wall Street’s pocket. “Campaign contributions do not and never have influenced Senator Dodd’s agenda and priorities,” DeAngelis wrote in a statement to Mother Jones. “As his record reflects—from working to stop abusive credit card practices and predatory lending to opposing industry-friendly bankruptcy reform and tax breaks for companies that ship jobs overseas—Chris Dodd’s priorities are not determined by the financial industry. His work is always and has always been about representing the interest of the people of Connecticut.” But it’s not clear that the people of Connecticut want Dodd around any longer. Big Finance execs and lobbyists, on the other hand, obviously believe it is very much in their interest to keep Dodd where he is.