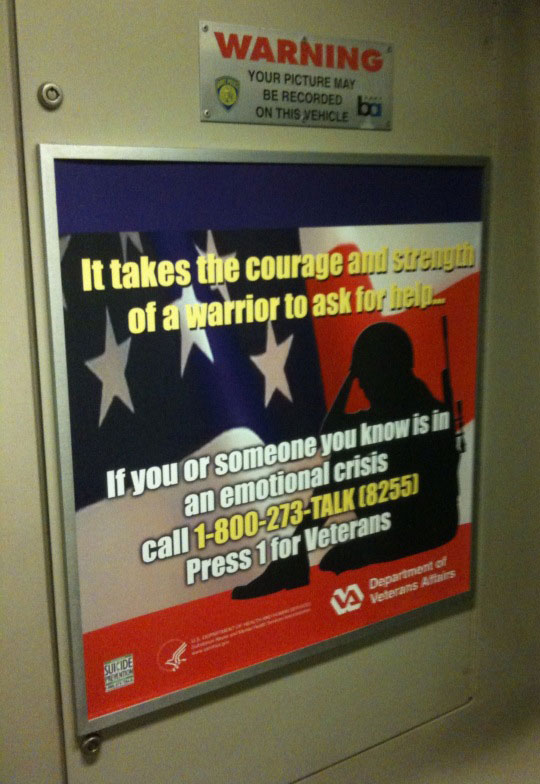 The 2010 United States defense budget is officially $533.7 billion, but it’s been estimated that it’s closer to $780 billion. The Department of Veterans Affairs budget is about $56 billion. That means that we spend 10 times as much to fight wars as we do to take care of the people who fought them.

Granted, weaponry is pretty damn expensive. So is getting soldiers to the two fronts we are currently fighting on (and the many other places where we are present) and making sure that all 1.5 million active duty personnel and over 800,000 reservists have the resources they need—though the extent to which we do that appropriately is questionable. But, according to the VA we also have 25 million living veterans, and a full 1/4 of the US population is eligible for benefits.

As they say, money talks, and sometimes it speaks directly to you through advertising. Recently, San Francisco Bay Area public transit has been besieged by ads for a mental health hot line for veterans. While this type of outreach is long overdue, the effort being undertaken to address veterans’ mental health is overshadowed by the campaign’s awful design.

If you look closely at the ad above that appeared in BART trains, you’ll notice that the proud American flag in the background looks like it was pasted from the Internet and then blown up, the outline of the soldier has some serious anatomical problems, and the god-awful yellow text is incredibly hard to read.

As it turns out, that grainy flag isn’t just a dpi problem. The VA must have thought the grainy Stars and Stripes was “arty,” because the graininess is the same on this much larger ad that appeared on AC Transit buses: 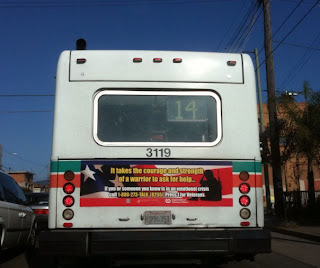 But, does design really matter? Yes, it does. While it is great that a concerted effort is being made to address the needs of veterans’ mental health, these slipshod ads are nothing compared to recruiting ads.

The active military has moved past the print campaigns of yore into snazzy television commercials (now with a softer, kinder feel), video games, mall-based “experience centers,” flash-laden websites and of course going directly to the source in our nation’s classrooms.

Every branch of the military has a separate recruiting website. The VA, however, only has one. It would be a fine website, if it were say, 1999. But, compare it to the Army one, where you can watch videos, play games, and even have a virtual sergeant show you around, and you begin to see where our priorities lie. 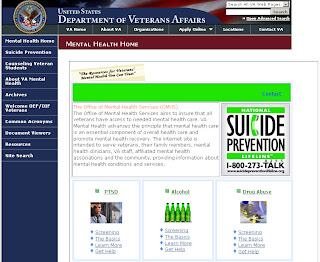 Thankfully, the Veterans Administration is not alone. It seems that both the VA and the Department of Defense have realized that they cannot meet the needs of this growing group. There are many private citizens working with government agencies in an attempt to fill the gap and address veterans’, and active duty soldiers’, needs. If you, or anyone you know, needs support, visit The National Resource Directory’s (better designed) site for a list of the organizations that are there to help.