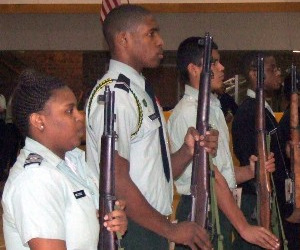 When Arne Duncan stepped down as the head of the Chicago Public Schools to become the secretary of education in January, the school district he left behind had little to brag about. While Duncan served as its chief executive officer, CPS received mostly average or below average rankings in “The Nation’s Report Card,” a Department of Education assessment of the country’s largest urban school districts. Its high school graduation rates lingered at around 50 percent, well short of the national average of 70 percent. And since 2004, CPS has failed as a district to meet No Child Left Behind‘s “adequate yearly progress” standards. In one area, however, Chicago’s schools stood out: In large part to Duncan’s efforts, they were—and remain—the most militarized in America.

Nearly 10,500 of Chicago’s 203,000 sixth- through twelfth-graders participate in some kind of military program on campus, from joining the Junior Reserve Officer Training Corps to enrolling in Pentagon-sponsored JROTC academies. As the district’s CEO (and previously as deputy chief of staff to his predecessor, Paul Vallas), Duncan oversaw the controversial move to bring full-fledged military academies to the Windy City. The district’s first, the Chicago Military Academy at Bronzeville, opened in 1999, and three more followed during Duncan’s tenure. Today, Chicago has six military high schools run by a branch of the armed services. Six smaller military academies share buildings with existing high schools. Nearly three dozen JROTC programs exist in regular high schools, where students attend a daily JROTC class and wear uniforms to school one day a week. And at the middle school level, there is a JROTC program for sixth, seventh- and eighth-graders.

Chicago may have the nation’s biggest JROTC program, but it is no longer an anomaly. Due to increases in federal funding for JROTC programs, the military’s presence in public schools is greater than ever before. More than a dozen academies partly funded by the Department of Defense have sprouted up from Philadelphia to Oakland, and the National Defense Authorization Act of 2009 passed last year will increase the number of JROTC units nationwide from 3,400 to 3,700 by 2020, at a cost of $170 million. (Peacework magazine obtained a list of schools that have requested JROTC programs.) The Marines are in discussions to open new JROTC academies in Atlanta, Las Vegas, and New Orleans, helping to expand a program that critics contend has blurred the line between education and recruitment.

Now that Duncan is the nation’s top education official, anti-recruitment activists worry that he will use his position to promote the expansion of JROTC and military academies as solutions for cash-strapped or underperforming school districts. “We see he has been promoting military academies,” says Darlene Gramigna, program director for the American Friends Service Committee’s Truth in Recruitment Program. “Around the country, that’s what going on—Arne Duncan believes in these military academies.”

Back in Chicago, Duncan praised military academies, the pillars of the district’s JROTC program, for the “leadership” and “discipline” they offered students. Enrollment in JROTC is mandatory for the 2,100 or so students attending the six academies, all of which are located in predominantly low-income and/or minority areas of the city. Students are referred to as “cadets,” wear military uniforms, undergo daily dress inspections, and take classes on military history, drug abuse prevention, orienteering, and the armed services, among other subjects, alongside their regular high school course load. Cadets can study marksmanship, march on the drill team, and, at some schools, even earn a spot in the school’s “chain of command.” JROTC teachers and administrators are often retired military service members, many of whom lack standard teaching credentials. The Pentagon has provided millions of dollars in funding to Chicago’s military academies. A loyal backer of Chicago’s military programs, Sen. Dick Durbin (D-Ill.) has secured $2.1 million for the Rickover Naval Academy and $5 million for the Chicago Military Academy at Bronzeville.

Students who don’t attend the Pentagon-affiliated academies also have plenty of options for getting military experience in the classroom. Thirty of Chicago’s 131 high schools offer JROTC programs. Chicago also boasts six “schools within a school,” in which the Navy or Army run large, autonomous JROTC programs in the same building as existing high schools. Brian Roa, a science teacher at Senn High School, which shares its facilities with the Rickover Naval Academy, says the divided-school setup fosters a sense of inequality on the campus. “Senn students are made to feel like second-class citizens inside their own school,” he wrote on the website Truthout.org. “The facilities and resources are better on the RNA side. RNA students are allowed to walk on the Senn side, while Senn students cannot walk on the RNA side.”

And for students not yet in high school, a “Middle School Cadet Corps” program brings the JROTC’s lockstep, uniformed culture to students as young as 11 or 12. Five hundred middle school students from more than 20 schools enrolled in the Cadet Corps in the 2008-2009 school year.

JROTC officials reject the assertion that such programs are little more than recruiting tools, but have released little data on how many students who go through them eventually enlist. The Associated Press recently reported that 5 to 10 percent of JROTC graduates join the military (compared to 3 percent of all high school graduates), but the Air Force, Army, Marines, and Navy chiefs of staff testified before Congress in 2000 that between 30 to 50 percent of JROTC cadets later sign up.

Supporters of military academies, including Duncan, have focused on the academies’ educational accomplishments. “These are positive learning environments,” Duncan said in 2007. “I love the sense of leadership. I love the sense of discipline.” However, academic achievement at Chicago’s military academies has been unremarkable: In 2007, while nearly 30 percent of 11th graders in the district met or exceeded standards on statewide achievement exams, just 14 percent did at Phoenix Military Academy and 8 percent at George Washington Carver Military Academy. Chicago Military Academy at Bronzeville fared somewhat better, with 33 percent of juniors meeting or exceeding the exam’s standards.

Meanwhile, the military’s presence in public schools continues to grow. Secretary of Defense Robert Gates‘ request for JROTC funding in the 2009 budget brings last year’s total from $76 million to $103 million. That boost in funding could be a boon for cash-strapped school districts. And though Duncan does not have control over JROTC programs, and has yet to make any major announcements regarding the military’s role in his vision for education reform, he has a direct line to the superintendents and mayors who control the country’s school districts, which certainly makes him the most prominent and influential backer of military programs in public schools. He reiterated his support for military academies and the JROTC in a recent AP story on the growth of military academies. “For the right child,” he said, “these schools are a lifesaver.”