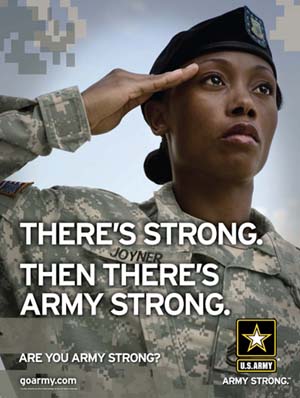 Both the U.S. Army and Marine Corps have complained that the pace of operations in Iraq and Afghanistan, the continuous deployments and the limited rest time in between them, has sapped overall readiness by wearing out equipment and restricting the time available for retraining. The heightened wartime risk of injury or death has also had an impact—causing many potential recruits to think twice before signing on the dotted line. Recruiting problems have especially come to plague the Army and Marine Corps, which have borne the brunt of the fighting (and the casualties) in Iraq and Afghanistan. The solution, as has been reported, has been for the service branches to lower their standards by granting “personnel conduct waivers” to recruits who in prior years would have been turned away.

According to the Army Times, waivers granted to new recruits for things like misdemeanor or felony charges have grown 11 percent since 2004. (Recruiters, it should be noted, are still instructed to reject recruits with criminal histories involving sex crimes or substance abuse.) A bewildering truth about the practice of granting conduct waivers is that recruits receiving them typically perform better and are promoted faster than their peers. This, however, has not alleviated concerns on Capitol Hill, where Rep. Henry Waxman (D-Calif.), chairman of the House Committee on Oversight and Government Reform, plans to hold a hearing May 22 to look into the matter.

Waxman’s questioning of Army and Marine Corps recruiting practices will land on David Chu, the Pentagon’s under secretary for personnel and readiness. In an earlier submission to Waxman’s committee, Chu elaborated on some of the recent recruiting trends, which Waxman summarized in a letter (.pdf), released today, requesting Chu to appear before his committee.

I understand that there can be valid reasons for personnel waivers and recognize the importance of providing opportunities to individuals who have served their sentences and rehabilitated themselves. At the same time, concerns have been raised that the significant increase in the recruitment of persons with criminal records is a result of the strain put on the military by the Iraq war and may be undermining military readiness.

Click here for more information on waivers granted for felony convictions across all four branches of the U.S. armed forces.