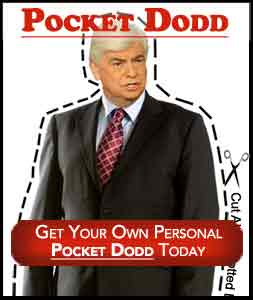 Courtest of Rob Simmons for US Senate.

The Dodd wars continue. As I noted recently, the embattled five-term senator and his surrogates have been fighting to dispel the notion that Dodd is too cozy with K Street and Wall Street, which he oversees as the chairman of the Senate banking committee. In the past, lobbyists and finance industry execs and PACs—along with insurance industry interests—have been prolific donors to Dodd’s campaigns, which make him a fairly easy target for attack campaigns like this. And Team Dodd, strenously trying to rehab the senator’s image, has fired back with ads like this.

The latest salvo comes from one of Dodd’s Republican challengers, former congressman Rob Simmons, whose campaign has launched a “Put Chris Dodd in Your Pocket” fundraising drive.

If you’re a wealthy special interest donor — like Angelo Mozilo of Countrywide Mortgage, or the guys at AIG, or even a pawn shop owner — you can rest easy knowing that you have a powerful Senator like Chris Dodd in your back pocket.

Now you as an ordinary citizen can have Chris Dodd in your pocket — and for a lot less than the millions in campaign contributions the banking, financial services, and insurance industries have showered on Chairman Dodd over the years.

Donate $5 or more to our campaign and receive your own personal “Pocket Dodd” you can cut out and display as a reminder of the special interest cronyism we’ll finally be rid of in November 2010.

In the last few years, Pocket Dodd has been busy: moving to Iowa, launching a frivolous campaign for President, jetting off to his cottage in Ireland — anything but doing his job overseeing a financial industry in crisis.

Meanwhile, Dodd’s heavy-handed efforts to distance himself from K Street have largely been met with ridicule inside the beltway. It certainly didn’t help his cause when he recently attended the Democratic Senatorial Campaign Committee’s annual retreat, held this year on Martha’s Vineyard, along with some of K Street’s most powerful players.