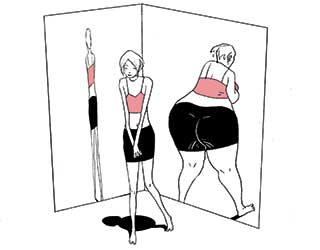 In 2006, the surgeon general called obesity “the terror within” and said it could “dwarf 9/11 or any other terrorist attempt.”

A recent anti-obesity ad campaign featured a “suicide bomber” with bars of butter strapped to his chest.

In 1997, the World Health Organization teamed up with the International Obesity Task Force to redefine obesity standards. “Overweight” was defined as a body mass index (bmi) of 25 or more, down from 27.8.

70% of the Obesity Task Force’s funding comes from the two drug companies that make the popular weight-loss pills Xenical, Meridia, and Reductil.

In 1998, the US government adopted the new bmi standards, spurring fears of an “obesity epidemic.”

That move was hailed by the American Obesity Association, a lobbying group that’s received funding from Weight Watchers and Jenny Craig.

Sarah Hartshorne, a “plus size” contestant on America’s Next Top Model, has a bmi of 21.5—well within the “normal” range.

People who weigh more than 220 lbs are 150% less likely to survive a car crash than those under 130 lbs.

One Pennsylvania school district that does so serves pizza and churros for breakfast.

In 2005, British doctors said a 15-year-old who’d eaten only jam sandwiches and Pop-Tarts since he was 4 was totally healthy, except for an iron deficiency.

First-time users of Alli, a new over-the-counter fat-blocking pill, are advised to “wear dark pants, and bring a change of clothes with you to work.”

In 2007, T.G.I. Fridays rolled out a “Right Portion” Cajun pasta dish with 4 times more fat than the usda‘s daily recommendation.

People served soup in bowls that secretly refilled ate 73% more than those eating from normal bowls. But they felt just as full afterward.

The “Diet Fork” has dull teeth and an uncomfortable grip that force eaters to “scoop less.”

The net worths of white women whose bmis fall 10 points increase by an average of $11,800.

Kick back, relax, and let these products melt the pounds away.

what: Fabuless
slims by: Downing a concoction of palm and oat oils slows digestion and produces a feeling of fullness, reducing caloric intake nearly 1/3.
the skinny: Some users report feeling bloated.

what: Conjugated linoleic acid
slims by: Promoting lean muscle growth
the skinny: Has been linked to type 2 diabetes

what: Nutraproteomics diet
slims by: Basing diet advice on your genetic makeup
the skinny: A dna test costs $525.

what: Soybean hulls
slims by: Decreasing fat in fried foods by as much as 36% without hurting “flavor, crispiness, or general liking”
the skinny: Fried foods still loaded with fat.

what: Rebiana sweetener
slims by: Has no calories
the skinny: This derivative of the stevia shrub has caused cancer and blocked sperm production in lab animals.

Christian weight-loss books include What Would Jesus Eat? and More of Jesus, Less of Me.

ChastitySF.com, a Catholic site, tells dieters to imagine a “Purgatory where every unnecessary mouthful of food you have ever taken will be purged from you as flaming vomit.”

Liquids account for 22% of the average American’s daily calories.

After New York City made eateries post nutritional data, a survey found that 80% of diners were surprised that a Big Mac meal had 1,200 calories.

A recent Burger King commercial included the line, “I will eat this meat until my innie turns into an outie.”

Researchers asked 3,000 overweight people how they responded to discrimination; 79% said they ate more.

Playboy Playmates of the Year selected during tough social and economic times are heavier and have larger waists.