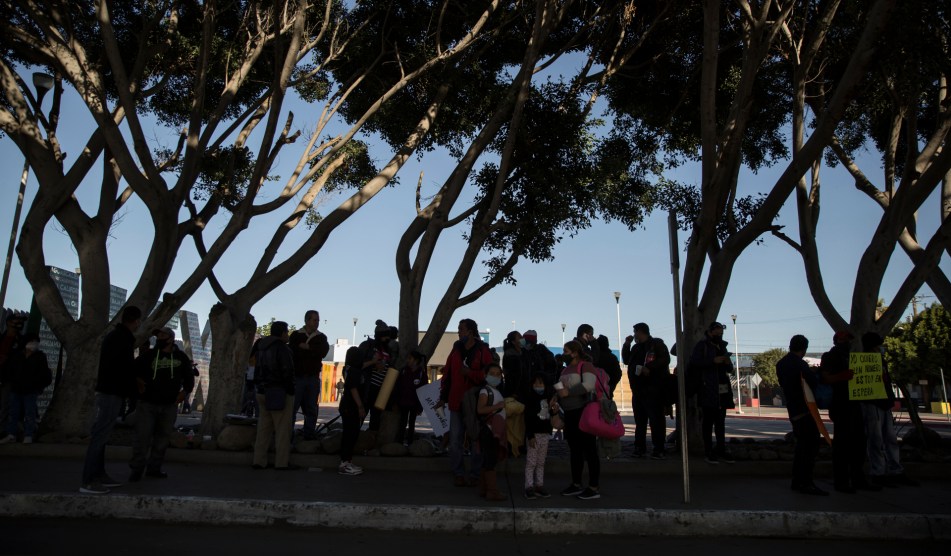 In Tijuana, Mexico a group of migrants gather in a plaza near the border crossing./AP

On Friday, the first group of asylum seekers forced to wait in Mexico for much of the last two years under a Trump-era doctrine began to enter the United States. Their arrival marks an official end to Trump’s callous “Remain in Mexico” policy. And the start of the government’s processing of approximately 25,000 active asylum cases for the people marooned in border cities.

Migrants waved to us as they were driven into San Ysidro. US Consul in Tijuana says this bus is transporting asylum seekers now that the Biden admin has done away with the #MPP/Remain in Mexico. More #asylumseekers to be processed daily. https://t.co/c90nhuja3y @nbcsandiego pic.twitter.com/DzsPRJSDTN

People who were placed under Migrant Protection Protocols and who still have an open case can now enter their information on this website. If they’re eligible, they receive a date and time for their appointment at one of three ports of entry. On Friday it was only San Diego, but the plan is to expand to the ports at Brownsville Monday and El Paso by February 26.

The United Nations High Commissioner for Refugees is helping triage in Mexico and will help administer the required COVID-19 test for those who are called to be processed. Once in the United States, asylum seekers will be allowed to continue their asylum cases in the immigration court closest to their final destination. Organizations like the Jewish Family Services of San Diego plan to assist people after they enter.

JFS of San Diego told me they are expecting 25 #mpp returnees today in their shelter in San Diego (now hotel rooms bc pandemic). Unclear whether they are already inside port being processed or not. We haven't seen them but it is possible they went early or to east side of port.

The Department of Homeland Security said that it was also planning on processing a “limited number of individuals” in San Diego on Friday who were “registered ahead of time by international organizations.”

On a call with reporters last week, officials with the Biden administration said none of the asylum seekers who are let in will be placed in immigration detention facilities, they will be given alternatives to detention including wearing an ankle monitor.

The announcement of this plan last week caused some confusion, seen this morning at a migrant camp south of Texas and at the San Diego border. Anyone who wasn’t placed in MPP and whose case isn’t active, does not qualify for this “phase one” plan, administration official said. The website also didn’t go live in on time in the early hours of Friday—leaving some refreshing anxiously. Once up, it went down because of “higher traffic than estimated.”

Two hours trying to complete registration for MPP clients on website since it went live. It's so little info but the site keeps crashing before you can complete. Such a nightmare.

The original plan was to process about 300 people per day at each of the three designated ports. Government organizations and non-profits who are working with migrants have tried to distribute the right information. But there is still confusion and desperation for people who have been living in squalor conditions for months, or even years.

More than 60,000 people who sought asylum in the United States were returned to Mexico under the MPP program since it was first implemented in early 2019. Human rights groups and immigration attorneys commended the Biden administration for taking a first step at undoing the havoc caused by Donald Trump at the border under this draconian policy. It’s still unclear what the Biden administration will do, if anything, for the asylum seekers who didn’t get a fair shot at this complicated court process or whose cases were closed ahead of this policy change.