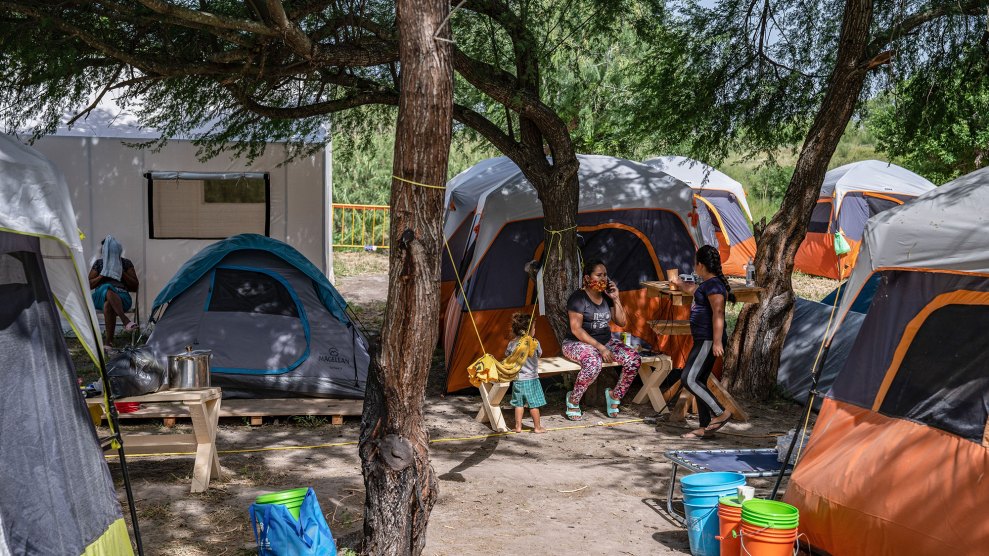 MATAMOROS, MEXICO - 2020/07/13: A woman talks on phone with children playing next to her in an isolation area. There are around 1,500 people living in tents inside a fenced off area of the park as they wait for their asylum hearings in the United States.Lexie Harrison-Cripps/SOPA Images/LightRocket via Getty Images

The Biden administration just released details of its plan to bring back as early as February 19 approximately 25,000 asylum seekers who were sent to wait in Mexico under one of Donald Trump’s most callous and impactful border policies, known as “Remain in Mexico.”

In a phone call with reporters Thursday evening, top administration officials said they’re working closely with the Mexican government and with “international organizations,” which will be doing most of the work reaching asylum seekers who qualify. (Earlier in the day BuzzFeed News wrote about the plan after receiving a leaked memo with details on the effort.)

The massive reversal of Trump’s policy would work like this: Those who have active cases under the so-called Migrant Protection Protocols will first have to register online through a virtual registration process that will be accessible from any location. Once registered they’ll be told when and where to show up for processing. The plan is set to start processing about 300 people per day at two ports of entry along the US-Mexico border and then expand to a third port shortly after launching.

The organizations doing the triage in Mexico—with financial assistance from the US government—will  administer COVID-19 testing for asylum seekers ahead of their entrance into the United States. US Customs and Border Protection officials should know ahead of time who is scheduled to be processed each day, and will work to process them “in a timely fashion with regard to public health,” a US official said on the call.

Once processed at the border, asylum seekers will be permitted to travel to their final destination in the United States and go through the rest of their case at an immigration court closest to their new home. In stark contrast with previous administrations, none of qualifying asylum seekers will be kept in prison-like immigration detention facilities, officials said; instead they may wear ankle monitors and check in with immigration officials in their new destination.

Officials emphasized that the changes will apply only to people whose asylum cases are still open after they were forced to wait in Mexican border towns under MPP. They also continued to push the administration’s message to asylum seekers who are not already in MPP that “now is not the time” to come to the United States.

“This latest action is another step in our commitment to reform immigration policies that do not align with our nation’s values,” said Department of Homeland Security Secretary Alejandro Mayorkas. “Especially at the border, however, where capacity constraints remain serious, changes will take time. Individuals who are not eligible under this initial phase should wait for further instructions and not travel to the border. Due to the current pandemic, restrictions at the border remain in place and will be enforced.”

In his first week in office, Biden directed the Department of Homeland Security to no longer enroll anyone else in the MPP program, and last week the president signed an executive order directing DHS to conduct a “prompt review” of the Trump-era policy. The plan released Thursday still leaves out key information like which ports will be processing people and which international organizations will be working with the US government to implement this effort. A partial announcement such as this could cause confusion in Mexican border towns and shelters, and could also leave asylum seekers vulnerable to fraud or crime as misinformation spreads. Administration officials said Thursday that they’d release more details soon and asked people in Mexico with open cases to stay put.

More than 60,000 people were forced to return to Mexico under MPP since it was first implemented in January 2019. As I wrote last week, MPP was designed to wear people down by dragging on the asylum-seeking process to the point that they would give up. Many did, and others have spent more than a year in shelters, the streets, and makeshift refugee camps in foreign border towns:

Human Rights First estimates there are about 20,000 people currently awaiting court under MPP—Cubans, Hondurans, Guatemalans, Venezuelans, and Nicaraguans among them. Many of them are families with young children, and many remain in danger.

According to government data obtained by the Transactional Records Access Clearinghouse, a research center at Syracuse University, more than 95 percent of the MPP cases that went through the immigration court system didn’t have legal representation, making it almost impossible to navigate a complicated process that required them to show up at the border, often in the middle of the night, so they could be bused to the nearest US immigration court for the day.

Officials on the press call said the Biden transition team had been working on phase one of this plan ahead of inauguration so it could be launched within the first month of a Biden administration.

Human rights groups and immigration attorneys commended the Biden administration for taking a first step at undoing the havoc caused by Donald Trump at the border under this draconian policy. It’s still unclear what the Biden administration will do, if anything, for the asylum seekers who didn’t get a fair shot or whose cases were closed ahead of this policy change.