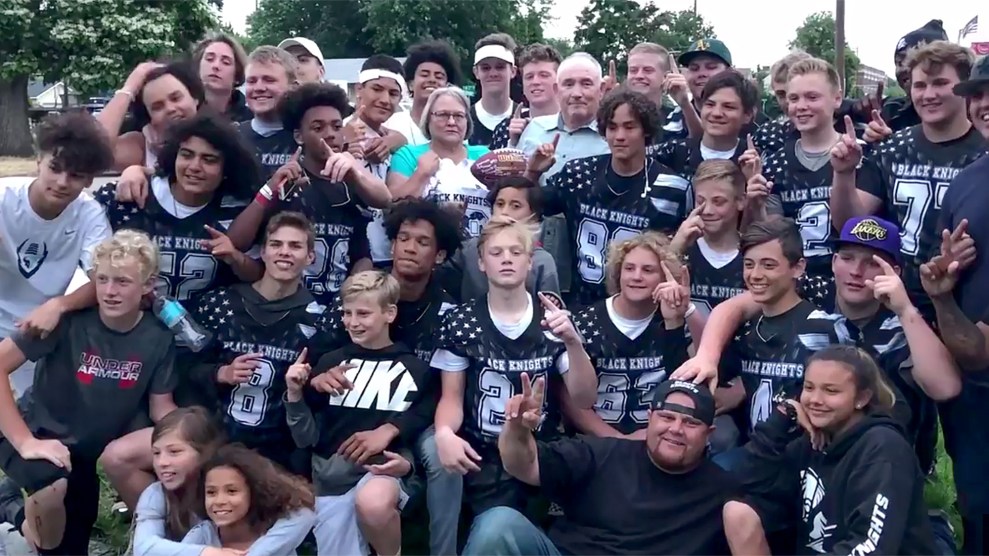 The Boise football players with the couple they rescued.Screenshot via the Idaho Daily Statesman

The 13- and 14-year-olds of an Idaho football team were jubilant on their way home through Oregon after winning a tournament in California.

Then they saw the overturned car and a couple stuck inside—and they got to work.

Alan Hardman said he was passed out from the crash when he thought he heard “young voices.” The teens got Hardman out, but his wife, Margaret, remained trapped. Six offensive linemen couldn’t push the car back over. But then 12 players from another van joined in to free her.

“I don’t know how we would have done it without them,” Alan Hardman tells the Idaho Statesman. “They didn’t even hesitate.”

Last Thursday, two days after the rescue, the Boise team visited the Hardmans, who were staying at a relative’s home in Idaho. They brought a signed football, flowers, cookies, and cards—and got hugs back in return.

Hi, David Beard here, and this week in Recharge, I’m highlighting some of the relentless and resilient young people who are striving for a better world. Recharge is a weekly newsletter full of stories that will energize your inner hellraiser. You can sign up at the bottom of the story.

That’s it for this edition! We hope these stories help you in the week ahead. Have a tip or a link? Email us at recharge@motherjones.com.