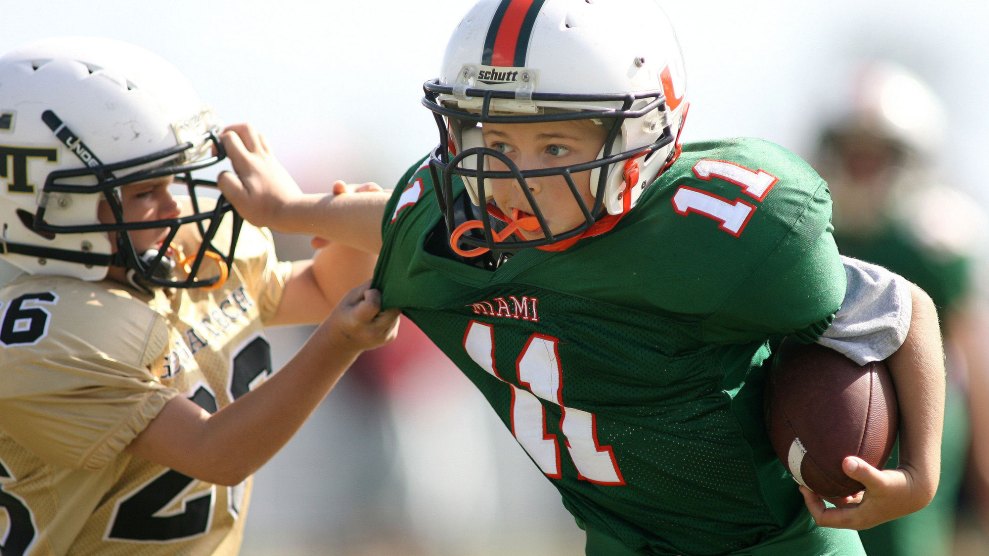 This week, Boston University researchers published a study that is sure to fire up parents worried about letting their kids play football: The earlier people played tackle football, researchers concluded, the sooner they could experience behavioral and emotional issues later in life.

The study, published in the Annals of Neurology on Monday, showed that those who played tackle football before 12 years old experienced those symptoms, on average, 13 years earlier than those who played the sport after that age. In interviews with friends and family members of 246 football players who have died, researchers discovered that for every year earlier these athletes played football, they reported experiencing cognitive, mood, and behavioral issues about two half and years earlier. Of the 246 football players whose brains were donated to the BU study, 211 of them had chronic traumatic encephalopathy, known as CTE, a degenerative brain disease caused by repeated hits to the head.

The study adds to the growing body of research around the connection of playing tackle football and long-term brain trauma. Last year, a study published in JAMA found that 177 of 202 donated brains showed signs of CTE. Among the 111 former NFL players whose brains were collected, 110 of them had the disease.

At the same time, participation in youth football overall has dropped in the last decade, according to data released last year by the Sports and Fitness Industry Association and Aspen Institute. During the 2016-17 school year, 25,000 fewer high schoolers played football, even as more teenagers participated in sports. State lawmakers and former NFL players have called for proposals to bar kids under a certain age from playing tackle football, and USA Football, the national governing body for amateur football funded in large part by the NFL, made changes last year aimed at reducing hits during games.

I spoke to Chris Nowinski—a co-author on the BU study and a former professional wrestler and college football player who co-founded the Concussion Legacy Foundation—about what this research means for youth football, why state efforts to regulate youth tackle football make sense, and why he thinks it may be hard for parents to pull kids out of the sport.

Mother Jones: What stood out to you about this week’s study?

“There are windows of vulnerability in the youth brain that aren’t there in the adult brain. It’s the same reason why kids can’t live in a house with lead paint but I can.”

Chris Nowinski: The most interesting finding is a 13-year onset of symptoms for football players who started tackle [football] before 12. It makes total sense from a brain development perspective, the idea that there are windows of vulnerability in the youth brain that aren’t there in the adult brain. It’s the same reason why kids can’t live in a house with lead paint but I can. It’s because we’re trying to protect their developing brain from being damaged. It’s the same reason why it wouldn’t surprise us to find if you hit a kid in the head a couple thousand times during their most important window of brain development, you might alter their cognitive reserve or other protective factors that would make them resilient to future disease.

MJ: What makes it unique in the growing body of research around the connection between football and CTE?

CN: This is the largest study of CTE in football—211 cases out of a total of 246 total brains, which in itself is an interesting finding. But also, the idea of looking at the odds of onset of symptoms: It’s almost a measure of quality of life. You could interpret it in saying you are losing over a decade of quality of life by starting too young. It was also interesting to see a finding, though not statistically significant, was also trending in the same direction for those football players who didn’t get CTE but did have other brain diseases and did report symptoms.

“This is the opportunity that we had when scientists first linked smoking to lung cancer.”

CN: The more data that you have today—and frankly what I know is coming—this is the opportunity that we had when scientists first linked smoking to lung cancer. Had we put the prevention efforts in place in 1940 that we had today, we would have saved a lot of lives and prevented a lot of suffering. We feel that, from a public health perspective, we have enough data to make the changes to prevent this disease from being more widespread in American athletes. We’re trying to convince people to take this opportunity.

I understand why there’s pushback. In having these discussions, I understand how parents or youth football coaches are confused. Frankly, we still have to educate the medical community. They are looking at this problem through the wrong lens. You make public health policy decisions based on the science you have and your best interpretation of that science. You never have perfect science before you make a decision.

MJ: Lawmakers in five states this year have proposed barring kids under a certain age from playing tackle football. Where do you stand on government-regulated age requirements for kids playing football instead of ones mandated by Pop Warner or USA Football?

CN: Here’s the problem with football and the reason why regulation makes the most sense: When we advocated for no heading in soccer before 14, a campaign called Safer Soccer, led by Brandi Chastain and other soccer leaders, we could talk to US Soccer. We could focus our energy on educating their board of directors. They could issue a rule change that quickly spread through soccer, and now nobody is heading before 11. USA Soccer banned it. This can’t happen in youth tackle football. Youth tackle football has no governing body where they have control over the game.

ER: What about USA Football or Pop Warner?

“Even if they thought no one should be tackling until 10, if they set that in the rules, there is still demand for tackle before 10.”

CN: It’s a bunch of independent capitalist enterprises who are all in competition for children. But they all think they do the best job. Even if they thought no one should be tackling until 10, if they set that in the rules, there is still demand for tackle before 10. A new league will pop up and swoop up those kids, and those kids would stay in the competing league for their entire youth football career. So the Pop Warner group or whomever would be out of business in a few years. They’d never get a new pipeline of children. We’re sort of stuck. The only organization has the power is the government. I don’t even know if the NFL would be able to stop youth tackle football.

MJ: How do you think this new research is affecting whether parents let their kids play tackle football at a young age?

CN: No one study should determine a decision. We have a white paper that cites a dozen studies that suggests that this is a bad idea, that this is a risk not worth the benefits. I’m hearing that a lot of parents that are being exposed to this information are starting to pull their kids out of youth tackle football. But it’s hard. I would expect what would first happen is that parents would just not enroll their kids in youth tackle football. Actually pulling kids out is not a result that I expect to see, because once they are in, there’s so much inertia in staying.

If a parent pulls a kid out, they become the bad person who took someone away from their friends and something their kids would enjoy. Parents don’t want to become the enemy. It’s also implied that if you pull your kid out of youth tackle football, you’re calling all the other parents bad parents. It affects your social relationships. Kids are taught at a young age in football quitting is bad. Kids would see this as quitting. I remember seeing this personally. You don’t want to walk away from the game until someone tells you you can’t play anymore. That’s the mentality. How well this education campaign has gone will be seen in August when leagues are recruiting kids for five weeks of preseason.

The interview was edited for length and clarity.