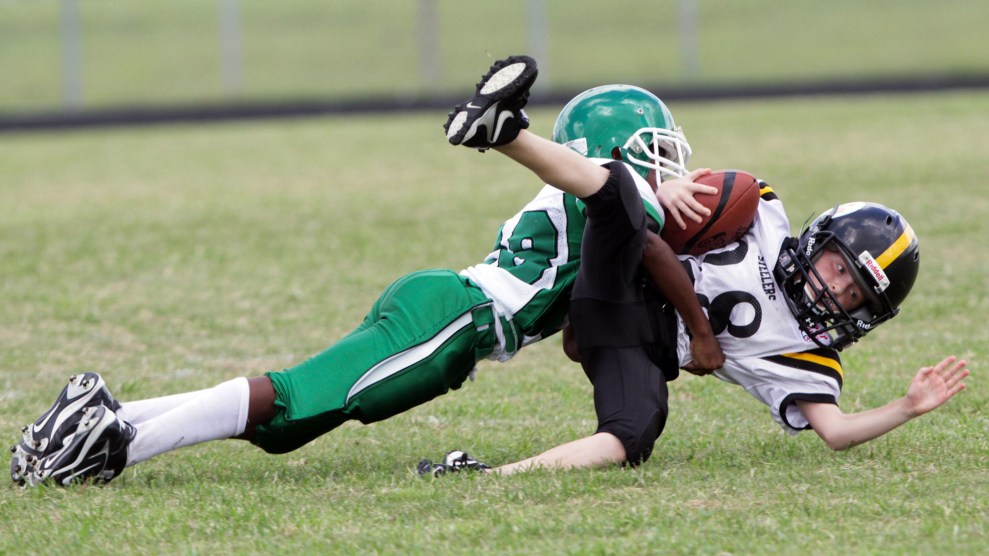 Two California lawmakers introduced a bill Thursday that would set a yet-defined minimum age for kids who want to participate in organized tackle football in an attempt to offset the risk of long-term brain damage. If passed, California would become the first state to set such a minimum age.

“The Super Bowl may be over, but the risk of brain injury to kids who play tackle football remains,” said Assemblyman Kevin McCarty, a co-author, in a statement. “We have an obligation to protect children from dangerous, long-term injuries resulting from tackle football, especially brain trauma.”

In recent weeks, state lawmakers in Illinois, New York, and Maryland have brought up similar measures. On January 11, New York Assemblyman Michael Benedetto reintroduced a bill that would ban tackle football for kids under 12 years old in the state, five years after he first tried to bring up similar legislation. “I firmly believe that when we see evidence of the danger to children, we need to act on that. There are laws that you need to use a car seat, wear a bicycle helmet. It’s the same principle,” Benedetto told the New York Times. When Benedetto first introduced a ban on youth tackle football for children under 13 in 2013, he found little support from fellow legislators and failed to get a senator to co-sponsor it.

Then, on January 25, Illinois state Rep. Carol Sente announced a bill that also would ban organized tackle football for children under 12 years old. The proposal, known as the Dave Duerson Act to Prevent CTE, is named after the Chicago Bears defensive back who committed suicide in February 2011 and who was later found to have developed chronic traumatic encephalopathy, a debilitating brain disease thought to be caused by repeated hits to the head over time. A broad examination of 202 deceased football players by Boston University’s CTE Center last July found that 87 percent of them showed signs of the disease. Of the 111 NFL players studied, 110 of them had CTE.

The Maryland bill, introduced on February 6 by state Del. Terri Hill and state Sen. William Smith, would bar tackle football program for kids under 14 years old. Once they turn 14, kids who participate in football would have to take a course on the risks that accompany playing football.

“I love having young people participate in sports. I’m trying to make it as safe for their lives, long-term, as possible.”

Hill’s legislation goes beyond football and includes restrictions on headers in soccer and checking in lacrosse before high school, both of which have been linked to high rates of concussions for both boys and girls. A study published in Neurology last February found that soccer players who headed the ball often were three times more likely to get a concussion than those who headed less often. What’s more, a study from Northwestern University found that over the course of five years, girls experienced a higher rate of concussions in soccer than boys did in football.

Paired with the restrictions on youth tackle football, Hill has also brought a measure, HB 552, that would force licensed health care professionals or someone who completes concussion risk training to be present during practices and games for youth sports leagues that occur at public facilities. “I love having young people participate in sports. I’m not trying to stop that,” she told WTOP, a Maryland television station. “I’m trying to make it as safe for their lives, long-term, as possible.”

The lawmakers’ attempts to restrict youth tackle football come as participation wanes due to parents’ concerns over the long-term health of their children. The idea for restricting tackle football for children has drawn support from prominent concussion researcher Robert Cantu, who has said children should instead opt for flag football, and some former NFL players like former San Francisco 49ers linebacker Chris Borland, who retired from the game at age 32 after concerns over the long-term head trauma. “The NFL has had a quarter-century to deal with this problem and is still suiting up five-year-olds in body armor,” Borland said at an Aspen Institute panel on Sports & Society. Change, he said, would “have to come from a higher power.”