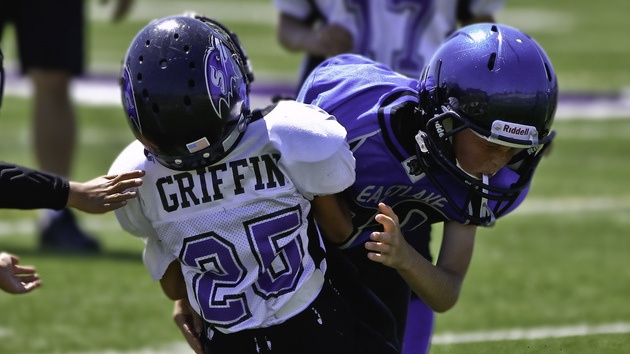 In the past year, both the NFL and the NCAA have settled multimillion-dollar lawsuits over concussions and football-related trauma, and complaints have even trickled down to the high school level. Next up in the legal crosshairs? Youth football.

On Thursday, Debra Pyka, the mother of Joseph Chernach, a 25-year-old Wisconsin man who committed suicide in 2012, filed a wrongful death lawsuit against Pop Warner, claiming that cognitive damage from his three years in organized youth football was responsible for his death. The lawsuit claims Chernach suffered from postconcussion syndrome and chronic traumatic encephalopathy (CTE), a degenerative brain disease most often associated with former NFL players, as a result of “numerous” concussions he sustained starting when he was 11.

Chernach did not play football beyond high school; BuzzFeed reported in December that in a university examination of the brains of 19 people who played youth and high school football, Chernach was one of four people to test positive for CTE.

The fatal combination altered Chernach’s “cognition, behavior, and mood” in the years leading up to his death, according to the lawsuit:

Pyka’s lawsuit came eight days after Boston University researchers released a study on former NFL players who’d played football before age 12. The study, published in Neurology, showed that repeated hits earlier in their careers could raise the odds of cognitive decline as adults.

Dr. Julian Bailes, chairman of Pop Warner’s medical advisory committee, dismissed the BU study, telling ESPN’s Outside the Lines that the effects on former professional athletes and those who never made it to that level are incomparable. The study’s lead author, Dr. Robert Stern, countered that although the study does not show what happens to those beyond the professional level, it “does suggest something that I think makes logical sense. The logic is you shouldn’t hurt your brain over and over and over again as a child.”

This isn’t the first high-profile lawsuit brought against Pop Warner over on-field injuries. Last March, the family of 16-year-old Donnovan Hill, who suffered a spinal injury in 2011 while making a tackle during a game, refiled a personal-injury complaint against Pop Warner and Hill’s coaches in California. Among other things, Hill’s lawyers argued that his coaches improperly taught him to tackle head-first. (Pop Warner later implemented rules limiting contact during practice and banning head-to-head contact.)

Meanwhile, participation in youth football has dwindled since 2008, in part due to the fear of on-field injuries. An espnW/Aspen Institute Project survey last September found that 82.3 percent of parents surveyed considered preventing their children from playing football as a result of those risks.

Read the rest of the complaint below: