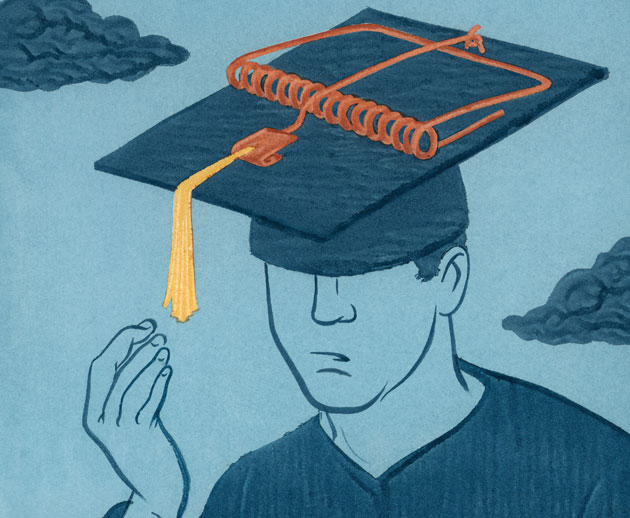 The folks who walked through Tressie McMillan Cottom’s door at an ITT Technical Institute campus in North Carolina were desperate. They had graduated from struggling high schools in low-income neighborhoods. They’d worked crappy jobs. Many were single mothers determined to make better lives for their children. “We blocked off a corner, and that’s where we would put the car seats and the strollers,” she recalls. “They would bring their babies with them and we’d encourage them to do so, because this is about building motivation and urgency.”

McMillan Cottom now studies education issues at the University of California-Davis’ Center for Poverty Research, but back then her job was to sign up people who’d stopped in for information, often after seeing one of the TV ads in which ITT graduates rave about recession-proof jobs. The idea was to prey on their anxieties—and to close the deal fast. Her title was “enrollment counselor,” but she felt uncomfortable calling herself one, because she quickly realized she couldn’t act in the best interest of the students. “I was told explicitly that we don’t enroll and we don’t admit: We are a sales force.”

After six months at ITT Tech, McMillan Cottom quit. That same day, she called up every one of the students she’d enrolled and gave them the phone number for the local community college.

With 147 campuses and more than 60,000 students nationwide, ITT Educational Services (which operates both ITT Tech and the smaller Daniel Webster College) is one of the largest companies in the burgeoning for-profit college industry, which now enrolls up to 13 percent of higher-education students. ITT is also the most profitable of the big industry players: Its revenue has nearly doubled over the past seven years, closing in on $1.3 billion last year, when CEO Kevin Modany’s compensation topped $8 million.

To achieve those returns, regulators suspect, ITT has been pushing students to take on financial commitments they can’t afford. The Consumer Financial Protection Bureau is looking into ITT’s student loan program, and the Securities and Exchange Commission is investigating how those loans were issued and sold to investors. (Neither agency would comment about the probes.) The attorneys general of some 30 states have banded together to investigate for-profit colleges; targets include ITT, Corinthian, Kaplan, and the University of Phoenix.

A 2012 investigation led by Sen. Tom Harkin (D-Iowa) singled out ITT for employing “some of the most disturbing recruiting tactics among the companies examined.” A former ITT recruiter told the Senate education committee that she used and taught a process called the “pain funnel,” in which admissions officers would ask students increasingly probing questions about where their lives were going wrong. Properly used, she said, it would “bring a prospect to their inner child, an emotional place intended to have the prospect say, ‘Yes, I will enroll.'”

For-profit schools recruit heavily in low-income communities, and most students finance their education with a mix of federal Pell grants and federal student loans. But government-backed student loans max out at $12,500 per school year, and tuition at for-profits can go much higher; at ITT Tech it runs up to $25,000. What’s more, for-profit colleges can only receive 90 percent of their revenue from government money. For the remaining 10 percent, they count on veterans—GI Bill money counts as outside funds—as well as scholarships and private loans.

How for-profit schools leave their students high and dry.

The 15 publicly traded for-profit colleges receive more than 85% of their revenue from federal student loans and aid.

1 in 25 borrowers who graduate from college defaults on his or her student loans. But among graduates of two-year for-profit colleges, the rate is 1 in 5.

Students who attended for-profit schools account for 47% of all student loan defaults.

Whatever the source of the funds, the schools’ focus is on boosting enrollment. A former ITT financial-aid counselor named Jennifer (she asked us not to use her last name) recalls that prospects were “browbeaten and hassled into signing forms on their first visit to the school because it was all slam, bam, thank you ma’am.” The moment students enrolled, Jennifer would check their federal loan and grant eligibility to see how much money they qualified for. After students maxed out their federal grants and loans, there was typically an outstanding tuition balance of several thousand dollars. Jennifer says she was given weekly reports detailing how much money students on her roster owed. She would pull them from class and present them with a stark choice: get kicked out of school or make a payment on the spot. For years, ITT even ran a (now discontinued) in-house private loan program, known as PEAKS, in partnership with Connecticut-based Liberty Bank, with interest rates reaching 14.75 percent. (Federal student loans top out at 6.8 percent.)

Jennifer, who had previously worked at the University of Alabama, says she felt like a collection agent. “My supervisors and my campus president were breathing down my neck, and I was threatened that I was going to be fired if I didn’t do this,” she says. Yet she knew that students would have little means to get out from under the debt they were signing up for. Roughly half of ITT Tech students dropped out during the period covered by the Harkin report, and the job prospects for those who did graduate were hardly stellar. Even though a for-profit degree “costs a lot more,” Harkin told Dan Rather Reports, “in the job market it’s worth less than a degree from, say, a community college.”

Jennifer says the career services office at her campus wasn’t much help; students told her they were simply given a printout from Monster.com. (ITT says its career counselors connect students with a range of job services and also help them write résumés, find leads, and arrange interviews.) By the time she was laid off, Jennifer believed the college “left students in worse situations than they were to begin with.”

It’s not just whistleblowers who are complaining about ITT. There’s an entire website, myittexperience.com, dedicated to stories from disappointed alumni. That’s how we found Margie Donaldson, a 38-year-old who says her dream has always been to get a college degree and work in corporate America: “Especially being a little black girl in the city of Detroit, [a degree] was everything to me.”

Donaldson was making nearly $80,000 packing parts at Chrysler when the company, struggling to survive the recession, offered her a buyout. She decided to use it to get the college degree that she never finished 13 years before. Five years later, she is $75,000 in debt and can’t find a full-time job despite her B.A. in criminal justice from ITT. She’s applied for more than 200 positions but says 95 percent of the applications went nowhere because her degree is not regionally accredited, so employers don’t see it as legitimate. Nor can she use her credits toward a degree at another school. Working part time as an anger management counselor, she brings in about $1,400 a month, but there are no health benefits, and with three kids ages 7, 14, and 18, she can barely make ends meet. She has been able to defer her federal student loans, but the more than $20,000 in private loans she took out via ITT can’t be put off, so she’s in default with 14.75 percent interest—a detail she says her ITT financial-aid adviser never explained to her—and $150 in late fees tacked on to her balance each month. Donaldson says she has tried to work out an affordable payment plan, but the PEAKS servicers won’t agree until she pays an outstanding balance of more than $3,500—more than double her monthly income. “It puts me and my family, and other families, I’m sure, in a very tough situation financially,” she says.

Donaldson says she didn’t understand how different ITT was from a public college. If she had attended one of Michigan’s 40-plus state and community colleges, her tuition would have been roughly one-third of what it was at ITT. Now, she says, all that time and money feels wasted: “It’s almost like I’m like a paycheck away from going back to where I grew up.”