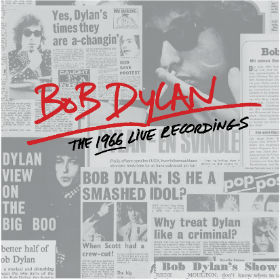 A massive 36-disc collection, The 1966 Live Recordings purports to capture every performance from Bob Dylan’s stormy concert tour of 50 years ago, when he ranged from the US to Europe to Australia, polarizing audiences in the process. The music is predictably great, and the sound quality is surprisingly good, for the most part; except for a handful of substandard audience tapes included in the name of completeness, these shows are taken from soundboards or were recorded with an eye to issuing a live album at the time.

On a practical level, the official release of this hefty package serves to reclaim the music from bootleggers and ensure copyright protection for its author. On a creative level, it documents a pivotal, oft-discussed moment in Dylan’s evolution. Each show was split between an acoustic set, where he played solo, and an electric one, in which he was backed by a noisy ensemble that included most members of what would become The Band. While Dylan’s embrace of rock’n’roll may have outraged tradition-minded fans (whose protests are occasionally audible), his unplugged renditions of classics like “Desolation Row” and “It’s All Over Now, Baby Blue,” are heartfelt, moving and not at all disrespectful to his folk roots. If the raucous high-voltage takes on “Like a Rolling Stone” and “Ballad of a Thin Man” are jarring by contrast, they also pulse with thrilling primal power. Whichever style you prefer, The 1966 Live Recordings is a remarkable document.