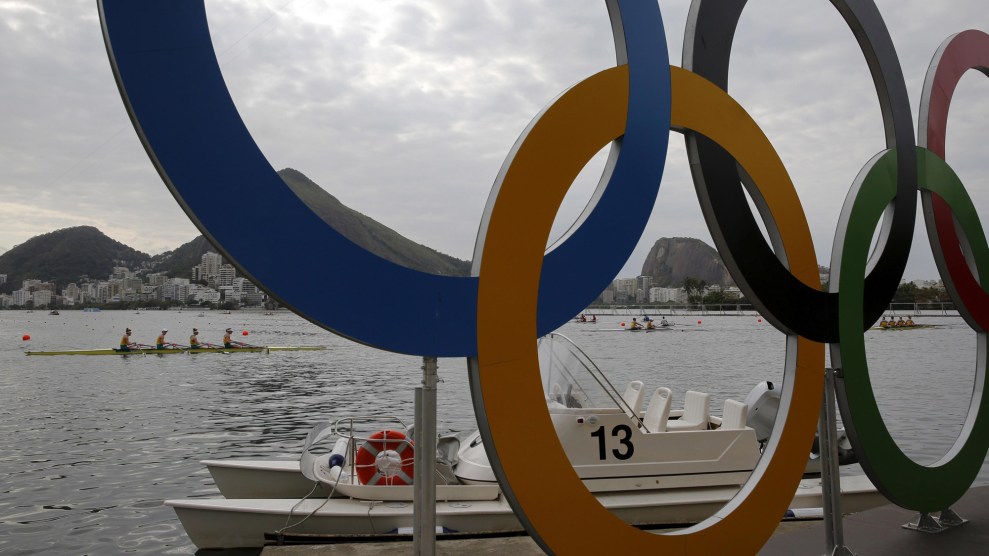 The run-up to the 2016 Summer Olympics in Rio de Janeiro has been marked by an ominous series of headlines: “Why Did the Rio de Janeiro Governor Say the Olympics Could Be a ‘Big Failure’?” “Rio’s Horror Week: Body Parts Wash Up Near Olympics Beach Volleyball Site.” “Expert to Rio Athletes: ‘Don’t Put Your Head Under Water.‘” “Rio Olympics Athletes’ Villa Declared ‘Uninhabitable.‘” “Rio Is a Cesspool of Human Waste.“

Of course, when the International Olympic Committee selected Rio to host the Games way back in 2009, Brazil’s economy was soaring, driven by thriving oil and commodity prices. Still, amid recent pressure to move the Olympics—because of the Zika virus, or political and economic instability, or contaminated water—the IOC has stood by its decision. “The last couple of days before the Olympics Games there is always one issue or other to be solved,” said IOC chief Thomas Bach in late July. “The Brazilians will solve it.”

1908, London: Two years before Rome was set to host the IV Olympiad, Mount Vesuvius erupted, killing thousands. With the Italian government channeling funds toward rebuilding the city of Naples, a British aristocrat stepped in to offer up an alternative site. West London became the new host, and the ’08 Games featured the first stadium specifically built for the Games. Due to the late switch, the spectacle played out over the course of six months.

1920, Antwerp: In the first Olympics held after World War 1, Belgian organizers faced a tight deadline: 15 months, to be exact. The Games were meant to honor the Belgium’s losses during the war, yet they became, Goldblatt writes, a “logistical nightmare.” Workers finished the main stadium days before the opening ceremony. More than 2,600 Olympians from 29 countries competed; athletes from Germany, Austria, Hungary, Bulgaria, and Turkey did not participate. Competitors slept on cots in cramped dorms. Many residents could not afford tickets to the venues, and the opening ceremony was notably empty. An IOC report afterward praised the spectacle as taking place “with mastery, perfection, and dignity.” But, as Goldblatt notes, “Almost everyone else thought otherwise.”

1968, Mexico City: In July 1968, three months before the Summer Games were set to start, student demonstrators marched in Mexico City to commemorate the Cuban Revolution. Protests persisted in the months after under the banner of “No queremos olímpiadas, queremos revolución” (“We don’t want the Olympics, we want revolution.”). On October 2, 10 days before the opening ceremony, the military stormed the Plaza de las Tres Culturas and met a planned rally with a spatter of bullets. Hundreds were killed or wounded, and thousands of others were reportedly rounded up and tortured in the aftermath. The Games went on, with the spotlight shifting to the iconic salute on the medal stand by American runners Tommie Smith and John Carlos.

2004, Athens: A year before the start of the ’04 Games, construction at 27 of the 29 venues was behind schedule, including the $250 million dome set to top Olympic Stadium. Then, in March 2004, the IOC gave Greek officials an ultimatum: Figure out what projects should be left behind or scaled back, or the committee would send monitors to oversee the final preparations for the games. Among the scrapped projects was the aquatic center’s proposed glass roof, much to the swimmers’ dismay. The delays left little time for officials to host test events at the venues; just days before the Games began, construction workers were wrapping up rail projects in the suburbs.

The Greeks’ outsize spending, which reached as high as $16 billion, reverberated years later, contributing to the country’s economic collapse. Its venues lay abandoned a decade later, with thousands of refugees recently settling in Athens’ Olympic park.

2008, Beijing: China’s first Olympics faced intense scrutiny from human rights advocates over the forced displacement of 1.5 million residents in the run-up to the Games. On top of that, everyone was worried about Beijing’s notoriously polluted air: At the time, the World Health Organization estimated that diseases stemming from pollution in China killed 656,000 citizens a year. When Chinese officials submitted the city’s bid for the 2008 Olympics, they pledged $12.2 billion to decrease air pollution and remove major factories in the surrounding area. They also took measures to reduce emissions, from banning 1.3 million cars from its roads to shuttering factories.

Still, it wasn’t enough to quell the pre-Games panic. After the IOC originally acknowledged that pollution could pose a particular threat to endurance athletes, the chairman of the IOC medical commission assured Olympic officials that the pollution would not affect athletes and visitors, saying the “mist in the air” was “a feature of evaporation and humidity.” Still, some athletes arrived just days before the opening ceremony, and American athletes donned protective masks. A study in the journal Environmental Science and Technology later found that Beijing to be the most polluted Olympics ever—just ahead of Rio.

2012, London: In March 2011, more than a year before the opening ceremony was set to begin, London’s Olympic committee struck a $161 million deal with a private security contractor called G4S to conduct searches, survey venues, and operate X-ray machines. G4S promised to recruit and train 10,400 guards for the Olympics and Paralympics. But two weeks before the Games kicked off, the firm announced it had trained only 4,000 guards and hoped to have 7,000 total before the spectacle started. (It ultimately provided 7,800 guards.)

The British military intervened, deploying an additional 3,500 soldiers. Then-Home Secretary Theresa May told lawmakers, “There is no question of Olympic security being compromised.” Under parliamentary scrutiny, G4S chief executive Nick Buckles conceded that the security issue was “a humiliating shambles for the country.”