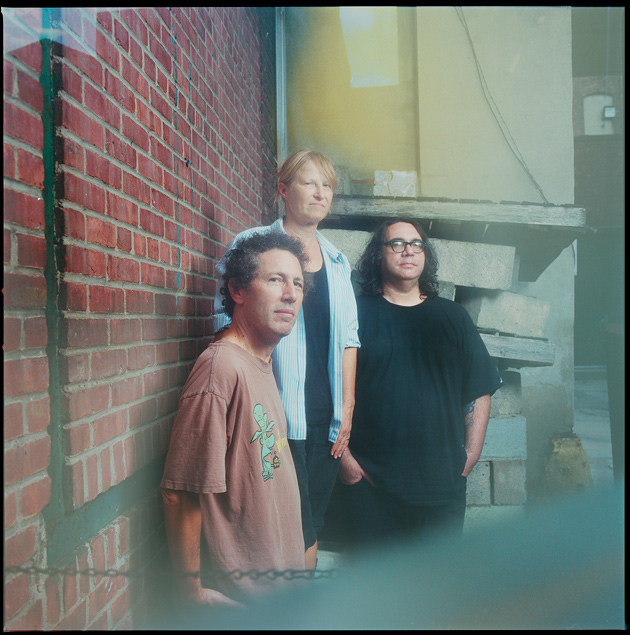 Coming out of the close-knit music community of late-1980s Hoboken, New Jersey, Yo La Tengo was the product of the romantic and musical relationship between guitarist and music journalist Ira Kaplan and drummer Georgia Hubley, the daughter of well-known animation producers John and Faith Hubley. With help from a rotating cast of supporting musicians, the husband-and-wife duo released four albums, including their 1990 breakout, Fakebook, before bassist James McNew came on board as a permanent and stabilizing member.

Last month, Yo La Tengo released its 14th album, Stuff Like That There, which serves as a companion in many ways to Fakebook. Both albums draw heavily on an eclectic mix of covers as well as remakes of the band’s previously recorded songs. Guitarist Dave Schramm also returns to lend his guitar work.

Active for more than 30 years, the band owes its staying power to its ability to absorb and integrate a vast range of influences and express them in a wholly personal way. Stuff Like That There singles out and connects some of those myriad points of reference—everything from The Cure, to pre-cosmic doo-wop from Sun Ra, deep cuts from The Lovin’ Spoonful and 1980s alt-rock contemporaries Antietam and Great Plains—to reveal the band’s emotional and philosophical musical center. I visited with the trio at their Hoboken rehearsal space.

“This has been a crazy year. Every time we play live, it feels diametrically opposed to how we played the last time.”

Mother Jones: How did the thematic similarity between Stuff Like That There and Fakebook come to pass?

Ira Kaplan: We’ve been asked a lot over the years about doing another album like Fakebook. When people ask you to do stuff, it’s not your idea anymore, so it’s tough to get behind it. But over time, we started realizing that that didn’t make it a bad idea.

MJ: Reinterpreting and re-recording your own songs is something you’ve done on other albums, too. Do you think that’s unusual?

IK: It may be unusual-ish. James was just listening to Country Joe and the Fish—all the San Francisco bands were very free with the interpretations of their material. If you listen to Jefferson Airplane’s God Bless Its Pointed Little Head, the live versions of their old songs don’t sound much like the studio versions. The Velvet Underground’s live versions changed constantly. And as Beatles bootlegs keep surfacing, you hear all the different sketches and ways they approached things, so it’s always felt pretty natural for us.

MJ: When Georgia and Ira created Yo La Tengo, you guys were very much amateur musicians.

IK: I still feel like an amateur. I remember being in college and taking a class on classical music and getting a big laugh when I said very sincerely that I was not really into trained voices. Some of the greatest singers can transcend their technical perfection and still sound great.

Georgia Hubley: They have to get over that stumbling block of talent!

MJ: You seems always to be evolving, yet Yo La Tengo maintains a consistent core identity. Are there parameters that you follow in making decisions as a band?

IK: I don’t think there are really that many rules. We are willing to change, and we’re willing not to, but we just try to be listening. This has been a crazy year. Every time we play live, it feels diametrically opposed to how we played the last time. We’ve been playing with different people and different configurations, and just allowing those things to happen. At the same time, we’re consciously going back in time and playing with Dave Schramm again to just see what that would be like.

MJ: The band began as a duo, with other musicians coming in and out. How did James’ involvement change things?

IK: We thought we had a band, but when James joined, it was, “Oh, I see! This is a band!” Everything we do now, even though we had four records before he joined, traces back to when he joined. May I Sing With Me was the first record he plays on, but with Painful, I think that’s when we were really a band for the first time.

MJ: Did it feel natural when you began, James, or did you find it tough to integrate?

JM: There’s a Halloween episode of The Simpsons where Homer goes back in time. If he touches one thing and then flashes back to the present, everything is different. I didn’t want to do that in the band. I was a fan; I already thought they were doing great. It was like, “Don’t touch anything! Don’t ruin that band you like!” So I tried to find that spot where I felt, “I didn’t ruin things today? Let’s move it a little further.” I’m still toeing that line. But it was natural in a sense of our personalities. The first day we practiced together, we spent just as much time discussing Second City Television episodes as we did playing music. 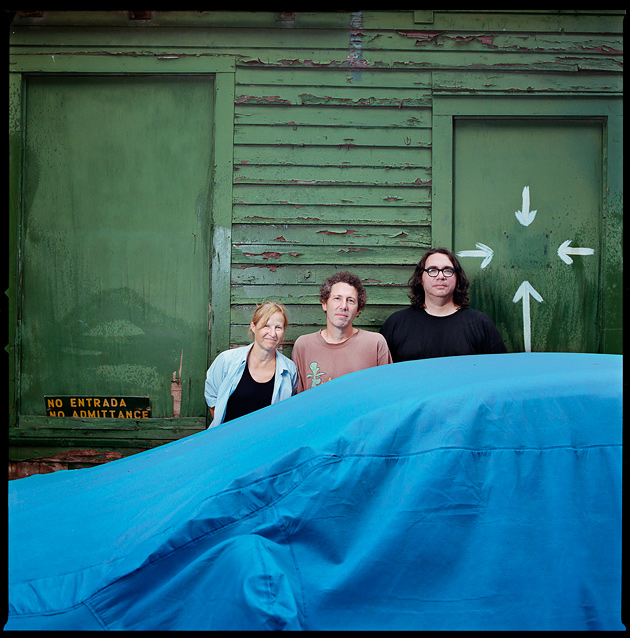 MJ: Georgia and Ira, as a married couple, is it hard to separate your relationship from the creative and business aspects of the band?

IK: It’s pretty jumbled, and it is a challenge. But I feel like it has to be that way when you are passionate about your work—as opposed to waiting until five o’clock so you can do the things you really care about. Like James mentioned about SCTV, there is a gray line. Like, what is band practice? These things just work their way in. That goes back to being receptive, and being confident that the experiences you are having are going to find their way into what you’re doing. It’s not a matter of “We gotta learn that bridge today!” Things happen more formlessly.

“‘Indie’ is a word we run from—that word is so amorphous. We’ve never been trendy, so consequently we’ve never fallen out of fashion.”

MJ: How would you say your dynamic has changed since you first started playing?

IK: I think there’s less panic, and more acceptance that not everything is going to go the way that you thought it might. For many years, we’ve written our songs by playing together and seeing what happens. But we can’t delude ourselves that we’re trying to do anything besides write songs. We are much more accepting of the days, or the weeks, when nothing we really liked happens. Or we’ll like something and try to play it again and find that it’s gone. I think there was a lot more anxiety about that in the past. Now it’s more like, “Oh well, that’s part of it.”

GH: We always are learning something, whether its, “Let’s not do that again,” or “How do we make that better?” Making music is really fun. Some of the other stuff can get to you, but I think we do a pretty good job of riding it out.

MJ: What other stuff?

JM: Everything but music!

GH: Everything else is terrible!

JM: There’s an actual physiological thing that happens to me on tour. There’s that moment where I sit in my seat and click the seatbelt, and five seconds later I fall asleep. There’s the excitement, and I guess anxiety, about what the shows will be like, but it’s overwhelmed by, “Thank God, here we go!” It’s letting go of all that other shit I had to do to get to this moment. It’s done—or at least it can’t touch me until we land.

MJ: Having worked through so many phases of the independent music business, what’s your perspective on how things have changed?

IK: I just have no idea. This experiment has no control subject. We’re always changing, circumstances change. I don’t trust any observation of what the difference is between Coyote and Matador, it may just be the difference between me in 1989 and me in 2015. I can only see it through my eyes.

MJ: So, to what do you attribute Yo La Tengo’s longevity?

IK: We managed to not ever be part of a movement. Even “indie” is a word we run from—that word is so amorphous. We’ve never been trendy, so consequently we’ve never fallen out of fashion. We didn’t have a hit, so we’ve never been locked into anything. As far as we know, maybe we are locked in somewhere from a few years ago in other peoples’ perceptions. Maybe we’re too stupid to know it.

“Some sports teams hate each other in the locker room and that’s what makes them great, but we’re not that team.”

GH: Or delusional? I think it’s probably a good thing.

MJ: What about the dynamic within the band that allows you to keep going?

IK: We were never a group that thrived on volatility. We just don’t work well calling each other out, saying, “That sucks!” Some sports teams hate each other in the locker room and that’s what makes them great, but we’re not that team.

We did a show recently in Spain where the sound on stage was miserable and no one knew what to do about it. Georgia stopped a song that had begun, which is not the response anyone was expecting, even Georgia. There’s no question in my mind that if that had happened years ago, the band’s response and my response would have been so much worse. We just kept going. It didn’t derail the show in ways that it would have. It wasn’t even something I had to reflect on later.

JM: Mindfulness in action. When you’re in the audience and you’re seeing a band and shit’s falling apart, that’s thrilling! But when it’s happening to you, you think, “This sucks! I hope nobody is seeing this.”

IK: Even if we do look awful, it was a human moment. But it’s not always easy, seeing yourself.

GH: This trip we just did was fairly difficult. We were on this bill with a lot of bands, and it was very hard to connect to the audience. It’s a strange way to feel when you’re about to pour your heart out—to get on stage and feel like, “Does this matter to anyone?”

JM: I was reacting to the same feeling, that there are some people who aren’t watching the show. I thought, “Okay, so this is for us.” It was a really beautiful, emotional feeling—just joyful: I love doing this so much, and I hope you do too. I left with a smile. Or something close to a smile. I was very tired.

You can catch Yo La Tengo at their upcoming tour dates in the United States and Japan. They’ll also be appearing at the Ann Arbor Folk Festival and Big Ears Festival in early 2016.

In Close Contact is an independently produced series highlighting today’s leading creative musicians. To be a part of it, visit www.pledgemusic.com/inclosecontact.