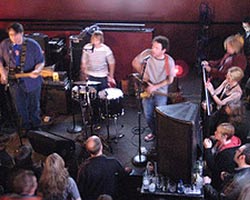 Having been a band since 1984, Yo La Tengo has seen it, heard it, and probably played it. Their most recent album, I Am Not Afraid of You and I Will Beat Your Ass, came out on Matador Records in 2006. More recently they’ve been working on a film score, and played a round of performances in Austin, Texas, at the 2008 South By Southwest festival.

Mother Jones spoke with Yo La Tengo members Ira Kaplin and James McNew on a warm, sunny morning after a SXSW performance in March. Drummer/vocalist Georgia Hubley chose not to be interviewed, but did show up at the end of the interview with a pleasant smile and a firm handshake.

Mother Jones: What does it mean to you to be in a band for as long as you have?

MJ: How so? I don’t think a lot of people understand what it’s like to be in a band that’s had such longevity.

Ira Kaplin: I mean, this week [at SXSW] is fairly typical for our life. We’ve done a couple of rock shows, we’ve played acoustically, and we did a radio session, where we just walked into a room filled with instruments and picked up whatever was lying around, and pretty spontaneously made up some songs. You know, we don’t normally do that all in the space of three days, but that is what we do. We play, and respond to what’s going on around us.

MJ: How do you maintain that ability to be spontaneous and come up with interesting results?

IK: We just do it. I don’t spend that much time thinking about the band or the audience. I just hope that people will respond. I mean, it’s out of your control. I don’t really think about our impact.

MJ: What’s going on with the band right now? What’s inspiring you musically?

JM: The other day I was walking down the street, and music was being shot at me, from all angles [at SXSW], I mean, I like to listen to music, but I like to do it on my own terms. I don’t like having it shot out of a gun at me, as I’m walking down the street. It makes me want to go home and just read a book. It’s like maybe there can be too much of a good thing.

IK: But going back to your question, in terms of what we’re thinking about with our music now, I think what we end up doing is like an accumulation of details. I think of specific things that we’ve done, and you just kind of look at what is in front of you and try to create and see what happens, rather than saying, ok, I want a hip-hop, jazz mélange, but played on bouzoukis, that’s what I really feel like doing today.

IK: You know, we played this comedy show, and the show was ending, and I was thinking, what can we do to make this little, four-song set special? And so we played “Bobby’s Girl,” this [Marcie Blane] song from 1962, and the audience was all born after 1962, and yet everyone responded, and it worked out really great. You know, that’s the kind of thing that just pops up at the right moment.

MJ: Has your M.O. of reacting to the moment and being spontaneous ever backfired?

IK: I guess it depends on what you mean by “backfired.” I mean, not everything works, but I still think it’s a great method. You know, if you don’t suck a lot [James laughs]. I mean, we’re all sports fans, and you know, you can have the best free-throw mechanics, but you’re still going to miss a free throw every once in a while. That’s just the way it happens.

MJ: It’s not easy to be in a band for a year, let alone 10 years or more. How do you maintain your relationships with each other in this band?

JM: I don’t even think about it. It’s just a part of my life. I’m an only child, so I grew up without brothers or sisters, and I feel like now I have some. It’s great.

IK: Well I have three brothers, and I definitely see the similarities. You know, because you end up with references and a language that you understand and other people don’t. My brothers and I would drive our parents crazy, just going out to dinner and scream at each other.

JM: I think that just happened like two weeks ago [laughs].

IK: I think there are different work methods that different people have, and there’s bands, and sports teams, that definitely thrive on dissent, and they hate each other so much, that it’s driving them. But that’s not what we’re like. We try to be nice to each other [both laugh], and I think that camaraderie works for us, as opposed to being competitive.

MJ: You were there at the beginning of the huge independent music label surge that really gained momentum in the 90s, and you seem to have pushed through all of that and remained consistent. What’s it been like seeing all those changes happen in music first-hand?

JM: We may not have forcefully pushed through it as much as we sort of walked by without noticing it. Well, that’s not exactly true. I mean, we have a lot of bands that we’re close with, and this may seem lonesome, but I think it adds to the longevity of a band if you don’t become tagged as part of a movement, because once a movement is identified, it will be out momentarily. So, you’re not as easily tagged and name-checked, but it allows you more freedom. I mean, but, we still get invited to stuff!

MJ: What’s something specific that’s changed for your band over the course of your career?

IK: Sure, there have been changes. But I’d say the biggest change was bringing James on. It was kind of a revolving door of people for a while, and James got involved in that revolving door. He was in another band, and Georgia and I were very comfortable with that. But then James became a permanent member, much to everyone’s surprise. That was a big change, around 91. By 92 or later 91, we were working on songs together, and that was a big change, for the better.

MJ: What’s next for the band?

IK: We’re going to work on another film score. We’ve done a number of score work before. I don’t know if we’re allowed to divulge too much about that, though.

MJ: What’s different about writing for a film as opposed to writing songs for an album?

JM: Oh, it’s totally different. When we write songs for records, it’s like we’re the directors of the film. What we say goes. But ultimately when you’re working on a movie, and there’s this guy with a vision, and he’s spent the last few years of his life on the project, and you want to make it work, you have to sort of follow his orders or suggestions. And since we have never worked that way before, that took a tiny bit of getting used to. With the three of us, we’ll do something and it immediately clicks, but with this, you’re shocked when someone tells you “that wasn’t quite what I was looking for.”

IK: When we do covers, it’s a lot easier for me, as a guitar player, to play some extravagant guitar solo for someone else’s song than my own. Similarly, when a director is saying, play jazz, you’re like, ok, we’ll play jazz. That would be a hard thing for us to say to each other, but you know, it’s his idea, so we’ll try anything. It’s not like we’re saying, “what made you think we could play something like that,” to each other, it’s like, “oh yeah, HE did! Don’t look at me!” One of the things that’s so exciting about doing a score, is that it always points us in new directions, and makes us try things we might not have done before, or come to as quickly. It changes the way you work.

MJ: What is a typical songwriting procedure for Yo La Tengo?

IK: We just start playing. We get together and practice, and we just start playing. Sometimes the songs come out more fully formed, other times, the vision is different, or there is something we want to come back to. It could be a drum beat, or a melodic progression, and then we’ll sort of build on that.

JM: I think we’ll have a bunch of new songs ready to go soon. I always get excited about that. Even if it’s like, hey, pretty soon we’re going to have new songs; I don’t know what they sound like yet, but I can’t wait. You want to have that dream before you hear the songs, and you try to remember what they sound like, and then you wake up.