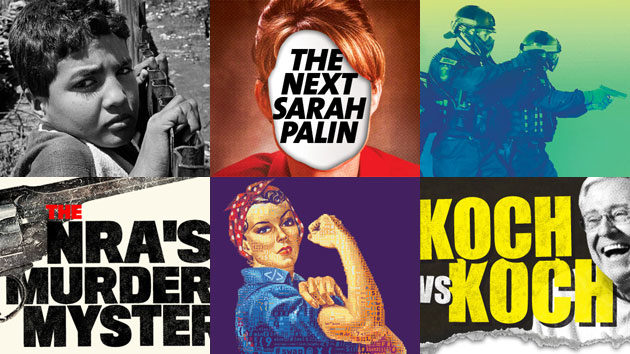 While conventional wisdom suggests that people won’t read lengthy magazine stories online, MoJo readers have regularly proven otherwise. Many of our top traffic-generating stories are heavily researched investigations and deeply reported narratives—stories which our readers stick to till the bitter end. So here, for your holiday enjoyment, is a selection of 14 of our best-loved longreads from 2014.  (Click here for last year’s list, here for our 2012 list, and finally here for our 2011 list).

The Science of Why Cops Shoot Young Black Men
And how to reform our bigoted brains.
By Chris Mooney

The Making of the Warrior Cop: Inside the Billion-Dollar Industry that Turned Local Cops into SEAL Team Six
Do police really need grenade launchers?
By Shane Bauer

The Great Frack Forward: A Journey to the Heart of China’s Gas Boom

US Companies are salivating over the biggest shale gas resources in the world. What could go wrong?
By Jaeah Lee and James West

The NRA’s Murder Mystery
Was the NRA’s top lawyer railroaded—or a “bad guy with a gun”?
By Dave Gilson

Inside the Wild, Shadowy, and Highly Lucrative Bail Industry
How $550 and a five-day class gets you the right to stalk, arrest, and shoot people.
By Shane Bauer

We Can Code it: Why Computer Literacy is Key to Winning the 21st Century
Why American schools need to train a generation of hackers.
By Tasneem Raja

70,000 Kids Will Show Up Alone at Our Border This Year. What Happens to Them?
Officials have been stunned by a “surge” of unaccompanied children crossing into the US.
By Ian Gordon

Koch vs. Koch: The Brutal Battle That Tore Apart America’s Most Powerful Family
Before the brothers went to war against Obama, they almost destroyed each other.
By Daniel Schulman

Is New Mexico Gov. Susana Martinez the Next Sarah Palin?
Petty. Vindictive. Weak on policy. And yet she is being hailed as the Republican Party’s great new hope.
By Andy Kroll

Who’s Behind Newsweek?
The magazine’s owners are anxious to hide their ties to an enigmatic religious figure. Why?
By Ben Dooley

Kidnapped By Iran: 780 Days of Isolation, Two Dozen Interrogations, One Marriage Proposal
How we survived two years of hell as hostages in Tehran.
By Shane Bauer, Josh Fattal, and Sarah Shourd

The Scary New Evidence on BPA-Free Plastics
And the Big Tobacco-style campaign to bury it.
By Mariah Blake

Inside the Mammoth Backlash to Common Core
How a bipartisan education reform effort became the biggest conservative bogeyman since Obamacare.
By Tim Murphy

This American Refused to Become an FBI Informant. Then the Government Made His Family’s Life Hell.
Plus, secret recordings reveal FBI threats.
By Nick Baumann