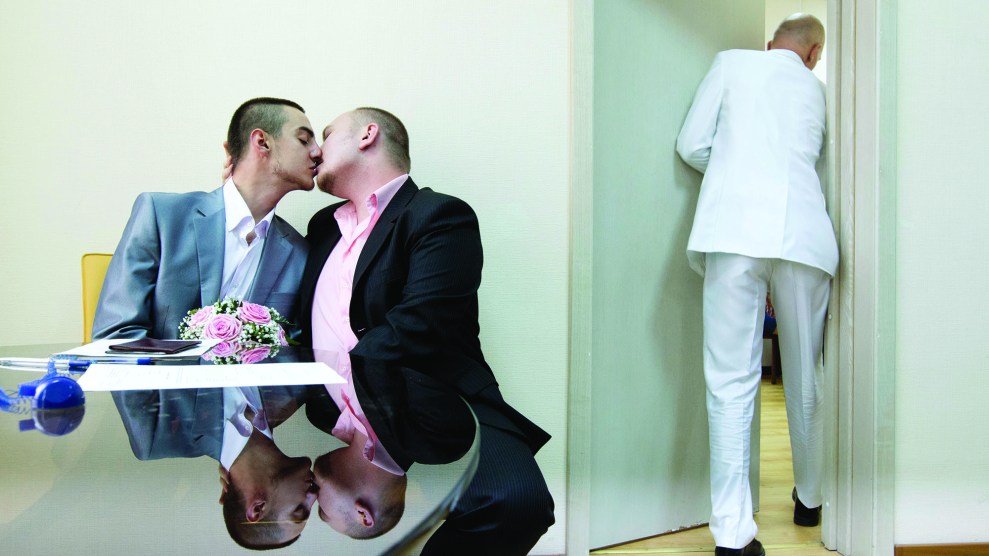 On June 28, 2013, five couples in wedding finery piled into a white limo and pulled up to a municipal office in St. Petersburg, Russia. The same-sex pairs had come to apply for marriage licenses they knew they were unlikely to get, but they wanted to make a statement. A video of the day shows confounded clerks unsuccessfully trying to keep the beaming lovers out as they head to a waiting room where they kiss in protest. “They didn’t even want to give us the blank applications,” says Yana Petrova, who tried to marry her partner, Elena Davydova. “But there wasn’t much they could do—we’d already downloaded them.”

Just two days earlier, the nation’s upper house of parliament had unanimously passed a bill banning “propaganda of nontraditional sexual relations among minors” and imposing fines between $120 and $30,000 for offenders. The bill was understood to prohibit all open expression of gay identity, from parades and rainbow flags to same-sex couples holding hands in public. President Vladimir Putin signed the bill into law on June 30.

Since the gay-propaganda law passed, activists have noted a sharp uptick in anti-gay violence. Yet some also say the law has bolstered their cause. “Before, it wasn’t accepted to talk about this,” Petrova says. “Now, there are no neutral people left. Everyone wants to express their opinion. That’s good. Debate is the only thing that can lead to any battle or change.”

Danish photographer Mads Nissen was in Russia teaching a photography workshop when Article 6.21 passed. A student tipped him off to the wedding registry attempt. The activists he met were suspicious at first, asking him to share his website and other information to test his intentions. (Anti-gay activists have attempted to infiltrate Russia’s LGBT community.) But soon, they were bringing him to underground clubs and spaces where the community gathers, and sharing their stories of being assaulted and arrested. At one gay-pride rally, Nissen witnessed a brutal attack on Kirill Fedorov, a young gay man and activist he’d been following for several days. “An anti-gay activist just came up to him and punched him in the face,” Nissen recalls. “In that moment, this wasn’t a theoretical thing anymore. It was real. It was happening. It was worse than I imagined.”

“Sometimes you do a story—you think it’s a big topic, and then when you get into it, it doesn’t seem so bad,” Nissen says. “This was absolutely the opposite. The more I got into it, the worse it was.” 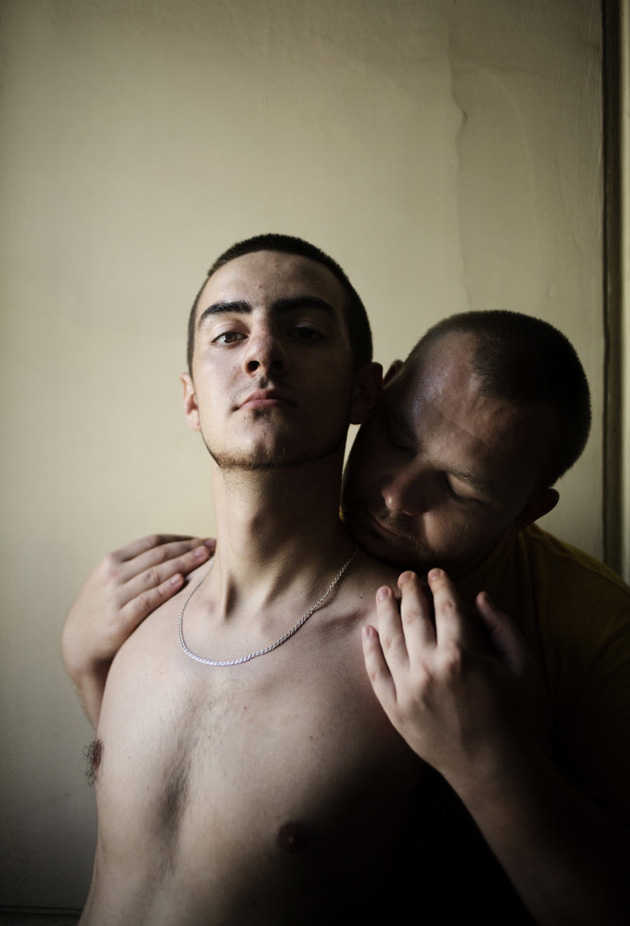 Yaroslav Yevtushenko with his boyfriend, Dmitry Chunosov. On June 30, 2013, Russian President Vladimir Putin signed Article 6.21 of the Code of the Russian Federation on Administrative Offenses into law. The law had passed Russia’s lower and upper chambers of parliament with unanimous approval. 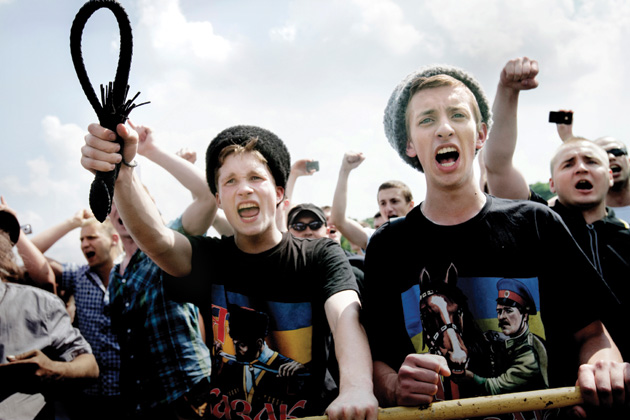 Ultra-nationalists, wearing Cossack-style hats and holding whips, shout abuse at participants in a gay-pride rally in June 2013 in St. Petersburg. Anti-gay protesters later violently assaulted some of the people taking part in the rally. Attacks on the gay community have become the norm: Since the law’s passage, Moscow’s main gay club, Central Station, has seen at least five attacks—including a shooting, a poison gas attack, and a raid in which equipment was stolen and the roof was damaged. 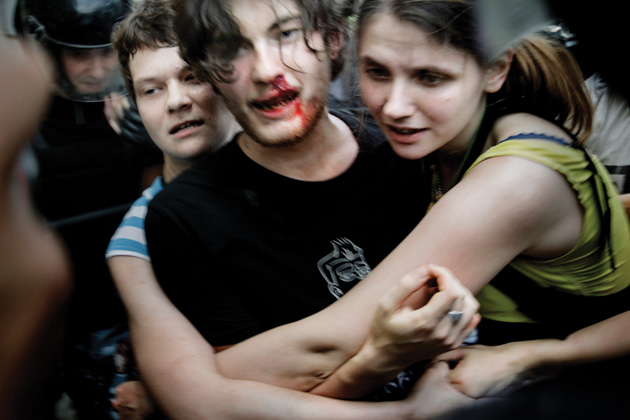 LGBT activist Kirill Fedorov was violently assaulted by anti-gay protesters during the St. Petersburg gay pride rally in June. He was later arrested. 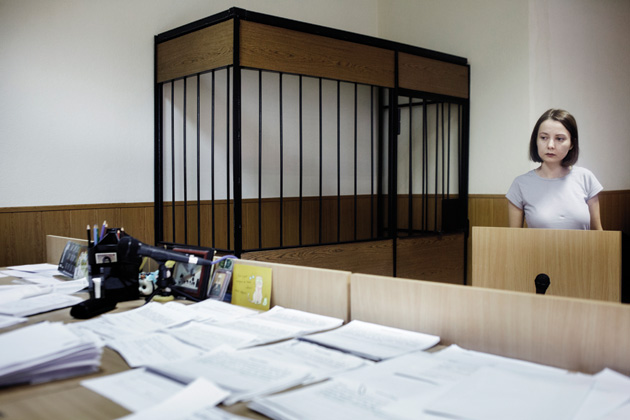 Yana Petrova, 28, appears in court after being arrested at the June gay-pride rally. A few years ago, Petrova probably would not have ended up in court—or have been at a pride event. “These laws are terrible, but thanks to them, so to speak, many people are actually coming out,” she says. “Before this, many gay people in Russia believed that if this isn’t being discussed, no one’s beating us, so great, all is fine, we can live. We can’t marry, but we can live. So, okay. Leave it at that.” 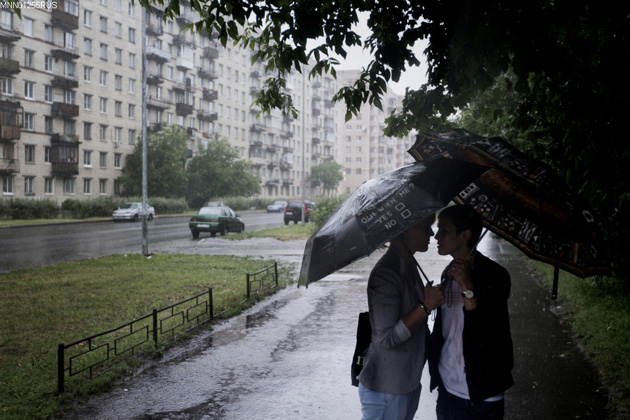 A lesbian couple meet after work near their home on St. Petersburg’s outskirts. 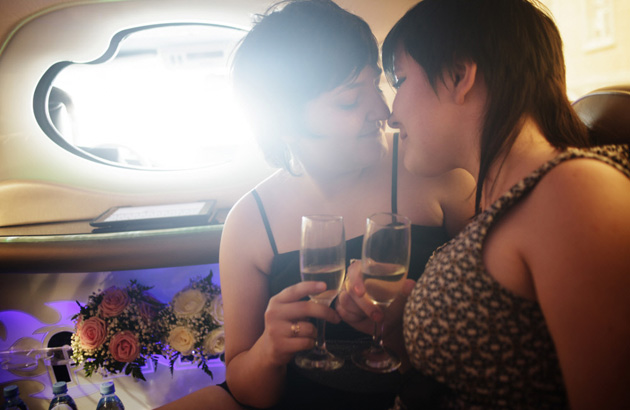 Ilmira Shayhraznova, left, and Elena Yakovleva, on their way to the St. Petersburg municipal office where they and four other gay couples attempted to file applications for marriage. When they arrived, the clerks gave the couples a copy of the Russian code to read, which de facto defines marriage as being between a man and a woman. 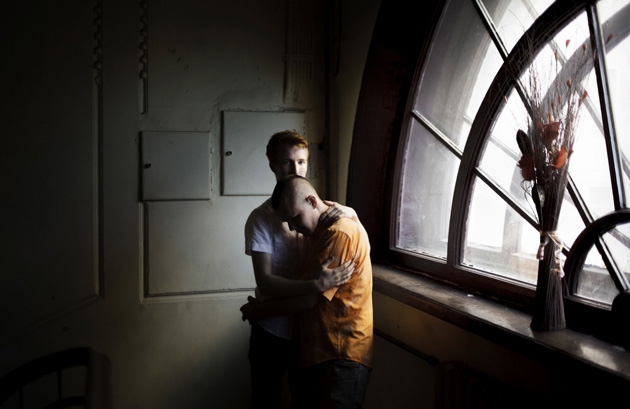 Pavel Lebedev, right, with his boyfriend, Kirill Kalugin. Lebedev says that he has been violently attacked six times in the previous year. In spite of the danger, he insists on his right to be open about his sexuality and to choose whom he loves.