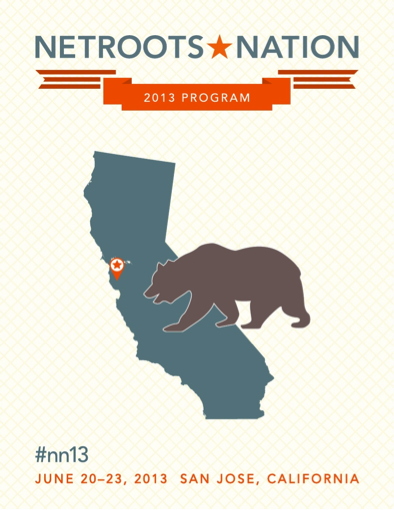 Check out the live streams for Saturday’s panels here:

This Thursday through Sunday, the eighth annual Netroots Nation (NN) conference will take place in San Jose, California. The conference provides a venue where “each year, thousands of bloggers, newsmakers, social justice advocates, labor and organizational leaders, grassroots organizers and online activists come together.” From electoral politics and campaign finance to women’s health, gun reform, and more, the issues that we regularly cover at Mother Jones will be front and center at the conference. We’re excited to host several panels to highlight these important issues and provide a venue for dialogue about them.

If you’re attending NN this year, be sure not to miss Mother Jones at the following panels:

Thursday, June 20, 10:30 a.m. PDT: What Political Consultants Don’t Want Donors to Know: How to Win Elections with Data-driven Field Operations
While political consultants in Washington rake in hefty paychecks for multi-million dollar ad buys, many elections in 2012 were won not by way of expensive ad buys, but with sophisticated field operations, the most effective of which were largely volunteer-powered. The panelists will discuss how data-driven field campaigns that use research to determine tactics are not only cost-effective, but have a much stronger impact on influencing voters and winning elections. The panelists will discuss the strategies they employed to identify and move the voters who can actually make an impact on the outcome of an election without breaking the bank. Mother Jones Dark Money reporter Andy Kroll will moderate this panel that will include president of CREDO Super PAC and political director of CREDO Mobile Becky Bond, executive director of NOI Ethan Roeder, and deputy director of the Analyst Institute Regina Schwartz, and executive director of the League of Young Voters Biko Baker.

Thursday, June 20, 4:30 p.m. PDT: How to Break a Game-Changer: The Case of the 47 Percent
In the 2012 election, Mother Jones broke “one of the important campaign stories of the year” with David Corn’s reporting of the 47 percent video. The story exploded and took the news cycle, social media, and both campaigns by storm. Many observers, including Romney himself, indicated that the video had a significant and negative impact on his campaign. The story won David Corn the George Polk Award for political reporting, as well as a National Magazine Award for video. However, the decision to release the video and the thought process behind making it public were not taken lightly. Come hear directly from MoJo-ers, some who helped break this massive story, on how they pulled it off, for the next time you’re faced with your own game-changer. Participants will include: Mother Jones co-editor Monika Bauerlein, managing editor Clint Hendler, multimedia producer Brett Brownell, and associate interactive producer Jaeah Lee. Also, be sure to read David Corn’s “The Story Behind the 47 Percent Video.”

Saturday, June 22, 10:30 a.m. PDT: Lessons from the Least Horrible Super PACs of 2012
Leaders of three unconventional super PACs will share their stories of why their work broke through in substantial ways—one using satire (Stephen Colbert’s), one using jujitsu to take on money in politics (Friends of Democracy) and one using grassroots power (CREDO). They will be joined by Mother Jones’ money in politics reporter to help crystallize how using innovative electoral strategies can help to upend the dominance of big money in politics. Kathay Feng, executive director of California Common Cause, will moderate the panel that will include: Mother Jones Dark Money reporter Andy Kroll, president of CREDO SuperPAC and political director of CREDO Mobile Becky Bond, outside counsel for Governor Rick Perry’s 2012 presidential campaign Matthew Sanderson, and CEO of JS Capital Management Jonathan Soros.

Saturday, June 22, 1:30 p.m. PDT: Disarming the NRA: Debunking Misinformation on Guns and Gun Violence (LIVE-STREAMED)
At the culmination of a horrific year of mass shootings, the Newtown massacre shocked the nation’s conscience, and for the first time in more than a decade put the debate over gun control at the political forefront. The tragedy also set off a fresh wave of misinformation about mass shootings and gun violence. A groundbreaking investigation from Mother Jones cast light on the mass shootings epidemic and debunked common misconceptions perpetuated by lobbyists, politicians, and even members of the media. In the six months since the Newtown tragedy, meaningful national gun reform has still not happened and misinformation continues to run rampant. This panel will discuss how the media can better report on gun violence, both to disarm gun-rights activists of their deceptive rhetorical ammo and to ensure that the public continues to learn the truth about America’s inordinate gun violence. Participants will include: Mother Jones senior editor Mark Follman, Law Center to Prevent Gun Violence senior staff attorney Laura Cutilletta, Media Matters deputy research director Matt Gertz, and mother of Virginia Tech survivor and Coalition to Stop Gun Violence Virginia organizer Lori Haas.

If you can’t attend in person, watch the live stream below on Saturday, June 22 starting at 1:30pm PDT:

Saturday, June 22, 3:00p.m. PDT: Organizing Support for Abortion Rights in Hostile Territory (LIVE-STREAMED)
When legislation is introduced in Virginia that severely imposes on reproductive rights, women across the country leap to attention. (Transvaginal ultrasounds anyone?) But when this kind of legislation is passed in Mississippi, progressives barely bat an eye. There is one abortion clinic remaining in Mississippi, and it’s currently under threat of closure. Arkansas is trying to outlaw abortion at 12 weeks, and North Dakota has prohibited it after six. As access to abortion becomes increasingly restricted, the fight over reproductive rights in these states becomes even more important. This panel will include experts who are working in these states and fighting the uphill battle to protect access to abortion. Hear from them about what they need in terms of support, resources, and more. Participants include: Mother Jones reporter Kate Sheppard, Trust Women Foundation and PAC founder Julie Burkhart, National Latina Institute for Reproductive Health executive director Jessica González-Rojas, Choice USA Executive Director Kierra Johnson, and Planned Parenthood of Minnesota, North Dakota, South Dakota CEO Sarah Stoesz.

If you can’t attend in person, watch the live stream below on Saturday June 22, starting at 3:00pm PDT:

In addition to these panels, you can follow Mother Jones reporters Andy Kroll (@AndrewKroll) and Kate Sheppard (@Kate_Sheppard) who will be attending and covering #NN13 themselves. See you in San Jose!