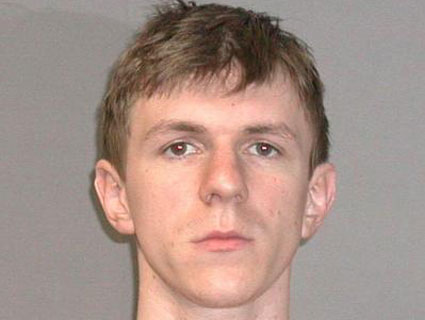 Conservative activist James O'Keefe III, shown here in a mugshot after his arrest on federal felony charges for allegedly trying to tamper with the phone lines in Sen. Mary Landrieu's (D-La.) office. He later pleaded guilty to a misdemeanor.

Wandering the halls of Netroots Nation 2012 in Providence, Rhode Island, this week, I began to wonder why more conservative moles hadn’t tried to crash this shindig. The annual progressive political convention for bloggers and organizers doesn’t turn away paying guests, so it seems ripe for infiltration. Saturday afternoon, on the last day, it finally happened: James O’Keefe III, “ratfucker” extraordinaire, showed up to tape the festivities. And we taped him—see the video below.

O’Keefe, standing about six-foot-two and looking taller in a skin-tight black tee, held a handicam at the ready, but he and his consort—conservative blogger Jim Hoft, a.k.a. Gateway Pundit—seemed a little intimidated when I whipped out my own videocam.

O’Keefe, who says he attended last year’s Netroots in Minneapolis, was in town to give a speech on investigative journalism and help give out some Breitbart Awards. So we’ve got that in common! I asked him how he felt about Mother Jones.

“You guys have been pretty critical of me,” he smiled.

When I asked him what his “investigative” outfit, Project Veritas, was working on in Providence, he demurred. “It’s classified.”

After I stopped rolling, two progressive gay bloggers sauntered over to chat O’Keefe up, but the right-leaning muckraker shuffled off surreptitiously.

“He’s been working out,” one blogger commented. Someone asked the other blogger if he’d ever consider bedding O’Keefe.

“Not in a million years,” he said, making a prune face.

O’Keefe, of course, is on a court-ordered probation that runs to 2013, owing to an “investigative journalism” project involving alleged plans for phone tampering* in the offices of Sen. Mary Landrieu (D-La.); there’s no word yet on whether this trip was approved by a probation officer. O’Keefe left before I could ask him.

*UPDATE: Daniel Francisco, executive director of Project Veritas, asked us to clarify that “James O’Keefe has never tampered with a Senator’s phones.” O’Keefe pled guilty to unlawfully entering federal property, admitting that he and his three accused partners “misrepresented themselves and their purpose for gaining access to the central phone system to orchestrate a conversation about phone calls to the Senator’s staff and capture the conversation on video.” Which sounds a lot better than phone tampering, the felony charge for which O’Keefe was initially arrested.

Francisco did not, however, dispute our characterization of O’Keefe’s shirt as “skin-tight.”