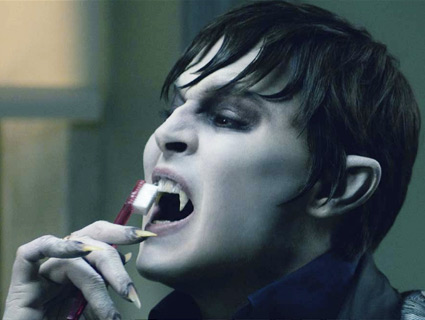 In March 2010, CollegeHumor.com debuted a sketch titled “Tim Burton’s Secret Formula.” The Burton character brainstorms with his team of “weavers of shadowy fantasms” to come up with his next big project. Burton rejects the idea for an original screenplay and declares that they will stick to taking “an old story that was already creepy and make it shitload creepier!” From there, the other elements and usual suspects fall into place: Johnny Depp, Tim Burton’s domestic partner, buckets of white make-up, black set design and wardrobe, Danny Elfman score, and haunted everything.

Even if you admire, as I do, Burton’s directorial output since 1999—which has indeed leaned heavily on rebooting famous old tales—it’s hard to argue that this was an unwarranted lampooning. Sleepy Hollow, Planet of the Apes, Charlie and the Chocolate Factory, Sweeney Todd, and Alice in Wonderland can be damn-near aesthetically interchangeable. The same goes for Burton’s latest, Dark Shadows, a star-studded adaptation of the influential 1960s daytime soap that threw together black magic, werewolves, and vampires—”Satan’s favorite TV show,” as it was labeled by boycott-happy Christian groups at the time.

To his credit, Burton has achieved what I like to call the AC/DC standard: Once popular artists really nail a good formula, they reach a point where it is permissible to abandon the pursuit of originality or innovation. Listening to the albums High Voltage and Highway to Hell back-to-back is much like watching Burton’s glut of remakes in rapid succession—the formula feels more like signature style, and you learn to forgive and often embrace the predictability.

But the fatal snag with Dark Shadows isn’t its lack of originality. It’s that halfway through, the film forgets to bring the fun. The result is a thoroughly uneven black comedy that builds to a thunderously unsatisfying conclusion.

For those unfamiliar with the source material, let’s get this out of the way. Johnny Depp plays Barnabas Collins, a scion of fishing magnates who live in 18th-century Maine. As luck would have it, their seductive family maid Angelique Bouchard (the fantastic Eva Green) is a witch. After having loads of ridiculous, rough sex with Angelique, Barnabas confesses he does not love her, dumps her, and falls in love with some heiress named Josette. Angelique is then provoked to do what so many spurned witches have done before her: She murders Josette, slaughters Barnabas’ parents, turns Barnabas into a ravenous vampire, and locks him in a coffin till the middle of the Nixon years. When Barnabas finally emerges, Angelique is still alive and looking ever-busty, and she runs the whole town. Thus, Barnabas connects with his distant descendants—current and hapless occupants of Collinwood Manor—in order to “restore the family business to its former glory.” Weird vampire stuff transpires, etc., etc.

During the film’s first half, everything looks and sounds promising: The ensemble cast is superb, the dialogue is witty, the art direction and cinematography are first-rate, and the soundtrack is packed with classic rock and funk (T. Rex and Curtis Mayfield, to name a couple). It initially seems like Burton is on track to continue his streak. Furthermore, the screenplay was written by Seth Grahame-Smith, the man who brought you Pride and Prejudice and Zombies and Abraham Lincoln, Vampire Hunter.

Burton scores big points when he lets things unfold with his controlled sense of wackiness and dark fantasy. A scene in which Angelique and vampire Barnabas have tumultuous airborne hate-sex on the ceiling and walls of her office (as Barry White’s “You’re the First, the Last, My Everything” blasts in the background) verges on “modern classic” territory. It’s a real pleasure to watch the old-fashioned vamp smoke ganja and discuss the secret to love with some anti-war hippie nomads—young idealists he then brutally devours. It’s all well and good until the second act, when the movie takes a nosedive into rushed, erratic storytelling.

It’s as if Burton fell into a state of panic and terminal indecision when it came time to wrap production. As the final showdown between the Collins family and Angelique draws near, crucial subplots and characters are left underdeveloped. The romance between Barnabas and New York girl Victoria Winters (a charming Bella Heathcote) barely has time to get off the ground, much less provide the basis for the inevitable and implied sequel. And it surely doesn’t help matters that the two plot twists revealed at the end (sequel set-ups) are far more likely to confuse or annoy than to intrigue. With the exception of Depp, none of the enviable cast (Michelle Pfeiffer, Jackie Earle Haley, Christopher Lee, Chloë Grace Moretz, Jonny Lee Miller, Helena Bonham Carter—all great) get nearly enough screen time to flesh out their inherently juicy roles. And how is it that you get aging garage-rocker Alice Cooper (Alice. Cooper.) to play himself in cameo and yet fail to do anything awesome with it? (Cooper’s appearance amounts to a glorified prop; no dialogue, just lip-syncing to studio recordings from his ’70s heyday.)

There is simply too much time dedicated to watching Depp brood, flare his nostrils, and speak with an impeccable British accent. Per usual, Depp nails the part with icy menace and ace physical comedy to spare.

But under the weight of the narrative mess, the movie gets sapped of its gallows humor and its roguish air. The brilliant cast, as well as the formidable crew, deserved a bizarro flick for the ages. Instead, they got half a winner, and half a fumbler.

Dark Shadows gets a wide release on Friday, May 11. The film is rated PG-13 for comic horror violence, sexual content, some drug use, language and smoking. Click here for local showtimes and tickets.