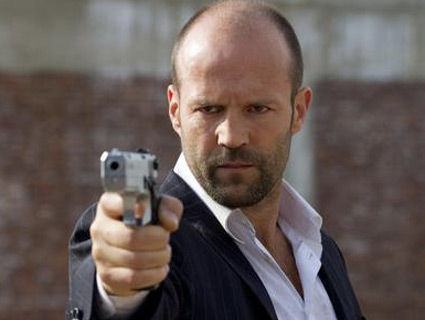 "If you skirt due process, I will come for you."Photo courtesy of Lionsgate

Trying to decipher the myriad plot twists of Safe is a lot like attempting to eat your own head: You won’t be able to do it, and passersby will point and laugh if you try. The new movie is the latest entry into the Jason-Statham-attacking-everything-that-moves subgenre. But unlike most of the other brainless fare to which the actor has lent his considerable thew, this film seems hell-bent on pummeling the audience with confusion.

The premise of Safe is, on its surface, straight and clean: Statham stars as Luke Wright, an ex-NYPD superstar who, on a whim, rescues a precocious 12-year-old Chinese girl he’s never met before. Since the child is being chased by Russian mobsters, Triad gangsters, and crooked cops through the mean streets of Brooklyn, Wright’s act of spontaneous altruism commences a citywide mad-dash of headshots and roundhouse kicks. The stage appears set for a by-the-numbers, harmless thriller in which we get to sit back and watch Jason Statham kick the shit out of nameless, unsympathetic henchmen.

If only writer-director Boaz Yakin had been content to stick with the formula. Instead, the film devolves into a needlessly complicated and bizarrely recounted story that ties together organized crime, New York politics, the War on Terror, human trafficking, and covert extrajudicial hit-jobs into one long stretch of garbled dialogue. By the time the credits roll, it’s exceedingly difficult to remember who blackmailed whom, which criminals were in bed with which government officials, and who exacted revenge upon whom. What it all boils down to is that greedy CIA agents control everything in New York City, from the elite police squads to the mayor’s mansion.

Out of his bungled script, Boaz Yakin did manage to set one new standard: He created the shallowest, sloppiest, most incoherent critique of American power that has ever emerged from Statham-based cinema. The final product looks something like what you’d get if you merged The Trials of Henry Kissinger with Tony Scott’s Domino.

When Safe sticks to its guilty-pleasure elements, it hits its mark. The movie is partially redeemed by the inventively staged bloodletting, which frames frenzied gunplay with slick camerawork. But that momentum is mostly dampened by the film’s insistence that Jason Statham has to wage a crusade against all that is wrong with the American intelligence community. The second half of the movie never reaches its full potential for rowdy, visceral fun because many of the supporting characters are too busy muttering about the details of a vast, boring crackpot conspiracy.

Safe follows in the tradition of other, more enjoyable B-movies that stick it to The Man and the jingoistic right. For instance, Die Hard 2 shows John McClane taking out a squad of ex-special forces trying to reinstall a Latin American dictator. Shoot ‘Em Up, for all its gun and carrot violence, actually has a message about the importance of gun control legislation. The Rock doubles as commentary on the unintended consequences of illegal black ops missions conducted by the United States. RoboCop was a not-too-subtle dig at the Reagan era and corporate domination.

But those films approached their politics with a satirical playfulness or earnestness that strengthened the narrative and action. Safe becomes a nonsensical drag when the characters start sermonizing.

And there’s plenty of sermonizing.

Safe gets a wide release on Friday, April 27. The film is rated R for strong violence throughout and some language. Click here for local showtimes and tickets.