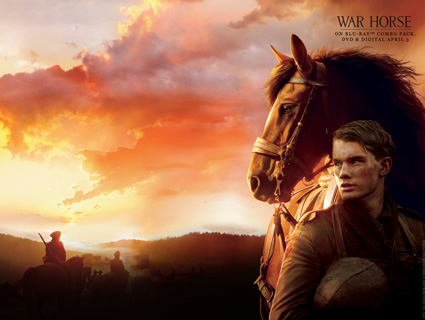 Well in advance of the 2014 centennial of the beginning of “the war to end all wars,” the First World War is suddenly everywhere in our lives. Stephen Spielberg’s War Horse opened on 2,376 movie screens and has collected six Oscar nominations, while the hugely successful play it’s based on is still packing in the crowds in New York City and a second production is being readied to tour the country.

In addition, the must-watch TV soap opera of the last two months, Downton Abbey, has just concluded its season on an unexpected kiss. In seven episodes, its upstairs-downstairs world of forbidden love and dynastic troubles took American viewers from mid-war, 1916, beyond the Armistice, with the venerable Abbey itself turned into a convalescent hospital for wounded troops. Other dramas about the 1914-18 war are on the way, among them an HBO-BBC miniseries based on Ford Madox Ford’s Parade’s End quartet of novels and a TV adaptation of Sebastian Faulks’s novel Birdsong from an NBC-backed production company.

In truth, there’s nothing new in this. Filmmakers and novelists have long been fascinated by the way the optimistic, sunlit, pre-1914 Europe of emperors in plumed helmets and hussars on parade so quickly turned into a mass slaughterhouse on an unprecedented scale. And there are good reasons to look at the First World War carefully and closely.

After all, it was responsible for the deaths of some 9 million soldiers and an even larger number of civilians. It helped ignite the Armenian genocide and the Russian Revolution, left large swaths of Europe in smoldering ruins, and remade the world for the worse in almost every conceivable way—above all, by laying the groundwork for a second and even more deadly, even more global war.

There are good reasons as well for us to be particularly haunted by what happened in those war years to the country that figures in all four of these film and TV productions: Britain. In 1914, that nation was at the apex of glory, the unquestioned global superpower, ruling over the largest empire the world had ever seen. Four and a half years later its national debt had increased tenfold, more than 720,000 British soldiers were dead, and hundreds of thousands more seriously wounded, many of them missing arms, legs, eyes, genitals.

The toll fell particularly heavily on the educated classes that supplied the young lieutenants and captains who led their troops out of the trenches and into murderous machine-gun fire. To give but a single stunning example, of the men who graduated from Oxford in 1913, 31 percent were killed.

“Swept Away in a Red Blast of Hate”

Yet curiously, for all the spectacle of boy and horse, thundering cavalry charges, muddy trenches, and wartime love and loss, the makers of War Horse, Downton Abbey, and—I have no doubt—the similar productions we’ll soon be watching largely skip over the greatest moral drama of those years of conflict, one that continues to echo in our own time of costly and needless wars. They do so by leaving out part of the cast of characters of that moment. The First World War was not just a battle between rival armies, but also a powerful, if one-sided, battle between those who assumed the war was a noble crusade and those who thought it absolute madness.

The war’s opponents went to jail in many countries. There were more than 500 conscientious objectors imprisoned in the United States in those years, for example, plus others jailed for speaking out against joining the conflict. Eugene V. Debs had known prison from his time as a railway union leader, but he spent far longer behind bars—more than two years—for urging American men to resist the draft. Convicted of sedition, he was still in his cell at the federal penitentiary in Atlanta in November 1920 when, long after the war ended, he received nearly a million votes as the Socialist candidate for President.

One American protest against the war turned to tragedy when, in 1917, Oklahoma police arrested nearly 500 draft resisters—white, black, and Native American—taking part in what they called the Green Corn Rebellion against “a rich man’s war, poor man’s fight.” Three were killed and many injured.

War resisters were also thrown in jail in Germany and Russia. But the country with the largest and best organized anti-war movement—and here’s where the creators of those film and TV costume dramas so beloved by Anglophile American audiences miss a crucial opportunity—was Britain.

The main reason opposition to the war proved relatively strong there was simple enough: In 1914, the island nation had not been attacked. German invaders marched into France and Belgium, but Germany hoped Britain would stay out of the war. And so did some Britons. When their country joined the fighting on the grounds that Germany had violated Belgian neutrality, a vocal minority continued to insist that jumping into a quarrel among other countries was a disastrous mistake.

Keir Hardie was a prominent early war opponent. A trade union leader and Member of Parliament, he had, by the age of 21, already spent half his life as a coal miner and he never went to school. Nonetheless, he became one of the great orators of the age, mesmerizing crowds with his eloquence, his piercing, heavy-browed eyes, and a striking red beard. Crushed with despair that millions of Europe’s working men were slaughtering one another rather than making common cause in fighting for their rights, his beard white, he died in 1915, still in his 50s.

Among those who bravely challenged the war fever, whose rallies were often violently broken up by the police or patriotic mobs, was well-known radical feminist Charlotte Despard. Her younger brother, amazingly, was Field Marshal Sir John French, commander-in-chief of the Western Front for the first year and a half of the war. A similarly riven family was the famous Pankhurst clan of suffragettes: Sylvia Pankhurst became an outspoken opponent of the conflict, while her sister Christabel was from the beginning a fervent drum beater for the war effort. They not only stopped speaking to each other, but published rival newspapers that regularly attacked the other’s work.

Britain’s leading investigative journalist, Edmund Dene Morel, and its most famous philosopher, Bertrand Russell, were both passionate war critics. “This war is trivial, for all its vastness,” Russell wrote. “No great principle is at stake, no great human purpose is involved on either side.” He was appalled to see his fellow citizens “swept away in a red blast of hate.”

He wrote with remarkable candor about how difficult it was to go against the current of the national war fever “when the whole nation is in a state of violent collective excitement. As much effort was required to avoid sharing this excitement as would have been needed to stand out against the extreme of hunger or sexual passion, and there was the same feeling of going against instinct.”

Both Russell and Morel spent six months in prison for their beliefs. Morel served his term at hard labor, carrying 100-pound slabs of jute to the prison workshop while subsisting on a bare-bones diet during a frigid winter when prison furnaces were last in line for the nation’s scarce supply of coal.

Women like Violet Tillard went to jail as well. She worked for an anti-war newspaper banned in 1918 and was imprisoned for refusing to reveal the location of its clandestine printing press. And among the unsung heroines of that anti-war moment was Emily Hobhouse, who secretly traveled through neutral Switzerland to Berlin, met the German foreign minister, talked over possible peace terms, and then returned to England to try to do the same with the British government. Its officials dismissed her as a lone-wolf eccentric, but in a conflict that killed some 20 million people, she was the sole human being who journeyed from one side to the other and back again in search of peace.

Why We Know More About War Than Peace

By the war’s end, more than 20,000 British men had defied the draft and, as a matter of principle, many also refused the alternative service prescribed for conscientious objectors, like ambulance driving at the front or working in a war industry. More than 6,000 of them were put behind bars—up to that moment the largest number of people ever imprisoned for political reasons in a Western democracy.

There was nothing easy about any of this. Draft refusers were mocked and jeered (mobs threw rotten eggs at them when given the chance), jailed under harsh conditions, and lost the right to vote for five years. But with war’s end, in a devastated country mourning its losses and wondering what could possibly justify that four-year slaughter, many people came to feel differently about the resisters. More than a half-dozen were eventually elected to the House of Commons, and the journalist Morel became the Labour Party’s chief parliamentary spokesperson on foreign affairs. Thirty years after the Armistice, a trade unionist named Arthur Creech Jones, who had spent two and a half years in prison as a war resister, was appointed to the British cabinet.

The bravery of such men and women in speaking their minds on one of the great questions of the age cost them dearly: in public scorn, prison terms, divided families, lost friends and jobs. And yet they are largely forgotten today at a moment when resistance to pointless wars should be celebrated. Instead we almost always tend to celebrate those who fight wars—win or lose—rather than those who oppose them.

It’s not just the films and TV shows we watch, but the monuments and museums we build. No wonder, as General Omar Bradley once said, that we “know more about war than we know about peace.” We tend to think of wars as occasions for heroism, and in a narrow, simple sense they can be. But a larger heroism, sorely lacking in Washington this last decade, lies in daring to think through whether a war is worth fighting at all. In looking for lessons in wars past, there’s a much deeper story to be told than that of a boy and his horse.

Adam Hochschild is the author of King Leopold’s Ghost and Bury the Chains, among other works. His latest bestselling book, To End All Wars: A Story of Loyalty and Rebellion, 1914-1918 (Houghton Mifflin Harcourt), focuses on the anti-war critics of World War I. Now available in paperback, it is a finalist for both the National Book Critics Circle Award and the Los Angeles Times Book Prize. To listen to Timothy MacBain’s latest Tomcast audio interview in which Hochschild discusses the largely untold stories of those in England who opposed involvement in World War I and the message they offer for our own time, click here, or download it to your iPod here.