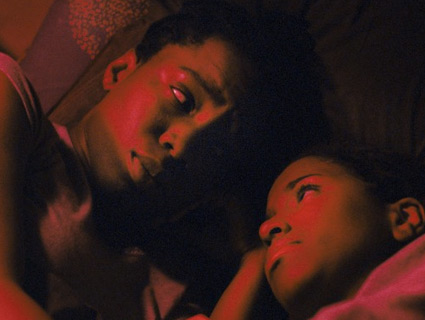 
It’s hard to portray adolescence in film without nostalgia or fantasy. Adults would rather remember their teenage years as better than they were, and teenagers are always trying to escape their own suffering. Dee Rees’ Pariah, a kind of emotional autobiography of a young Brooklyn teenager named Alike (Adepero Oduye) who is navigating her coming-out process, captures adolescence in all its awkwardness and tragedy like few films in recent memory.

Oduye is a master of conveying startling sincerity without earnestness, and her portrayal of Alike demonstrates how the utterly specific can be entirely universal. That’s essential, because Pariah is almost as much a film about growing up as it is about growing up as a lesbian in Brooklyn. Alike is almost as much of a pariah at home hiding her sexuality from her parents as she is at the strip club, surrounded by women in Starter jackets tossing crumpled bills at bare flesh. Early on, we watch Alike literally put her closet back on as she rides the bus home from the club, slipping off her jersey to reveal the pink shirt with the sparkly writing underneath. Alike is stuck being neither what other people want her to be nor who she wishes she was—which, in a broad sense, is exactly what adolescence is.

Rees knows about her subject’s struggle. Though Rees (who wrote Pariah while working as an intern on Spike Lee’s Inside Man) is originally from Nashville, Tennessee, she told an audience at an early screening of Pariah at Washington DC’s E Street Cinema in November that her coming out took place at least partially while she was living in Brooklyn. “When I went to my first lesbian club I felt like I wasn’t hard enough to be a butch, but then I wasn’t soft enough to be femme,” she explained. “I felt like I was caught in the middle of somewhere so I felt kind of invisible, and that is Alike’s struggle as well.” She was always certain that coming out was about more than simply discovering she was attracted to women.

“It was clear that I loved women, that wasn’t my question,” Rees said. “My question was more how to be.”

“How to be” is Pariah‘s central concern as well, and all else—even New York City, which too many directors use as a sort of visual MSG to add depth and flavor to bland stories—takes a back seat. If not for the tells—the accents, the trash cans on the sidewalk, the ambient sound of the elevated train—you wouldn’t actually know Pariah takes place in New York. You don’t see a skyline until the penultimate scene in the film. Instead, Rees’ camera maintains an unbroken intimacy with its subjects—especially Alike, who is caught in what Rees calls a “tug of war” between a best friend who “is trying to impose a way of being on her that is not really her” and “a mother who wants her to be a different way that is not her either.”

Alike knows she is a lesbian. She does not need to get used to it, and she does not need to admit anything to herself. It is the rest of the world—from her fearful and lonely religious mother to the liquor store clerk scowling at women in durags to the pretty girl who dismisses the idea of a relationship because she is not “GAY gay”—who have what we might call “issues.” Alike is not coming to terms with being a lesbian—the world is coming to terms with her being lesbian. Pariah is moving in no small part because of its timeliness—the opposition to the gay rights movement in America longs for a past when society might have shamed gay people into invisibility. They know that time will never come again, yet, like Alike’s mother, they cannot bring themselves to accept the simple, devastating truth that, as Alike quietly says, “there’s nothing wrong with me.”

It’s hard to remember the last time a good black film about growing up was even made. Pariah  has little in common with the mainstream black films of the past two decades.

The film has a gentle didacticism to it—its politics are obvious, and there are few mysteries about where the characters are going. The clueless and controlling parents, the doomed first romance, the confusing, porous walls of best friendship with those from whom we might want more—all of this is familiar. Nevertheless, Pariah doesn’t feel as typical or preachy as it should, because of Rees’ direction, Oduye’s performance, and a cultural context that rarely makes it into movie theaters.

Pariah‘s unique milieu is most apparent in how Rees’ movie seems unconcerned with white people. Her cinematic eye rarely leaves the faces of its subjects, let alone the Brooklyn neighborhood where Pariah takes place. That focus is an implicit reminder that although black people’s relationship to white people remains a central drama in American film, it is not necessarily all that central to how most black people actually live their everyday lives. Perhaps the only explicit reference to whiteness in Pariah comes when the old “flesh colored band-aid” joke is repurposed to new meaning and hilarious effect.

It’s hard to remember the last good black coming-of-age film that was not a mere exploration of human misery. Pariah has almost nothing in common with the mainstream black films of the past two decades, most of which consist of romantic and ensemble comedies with bloated casts containing as many random celebrities as actors. It also doesn’t quite fit with prior critically acclaimed bildungsromans made by African-American directors, most of which have focused on the bleakness of ghetto life and the bloody yield of the illicit drug trade. Have any film characters suffered more than the black children of American cinema? When not being shot to pieces by gangbangers (Boyz in the Hood) or raped by their HIV-positive parents (Precious), they’re being given away to live with white families, which is apparently the only place they can find happiness (The Blind Side). It’s not that these sorts of films never ring true—it just seems they’re the only kind being made.

There is joy in being young and black, though evidence of this in American cinema is difficult to find. You can only watch The Wood or Love and Basketball so many times. But even in a story about an adolescent caught in the ebbing tide of American homophobia, Rees and Oduye manage to get that joy across. Pariah leaves you aching, not only because of the story it tells, but because it whispers softly of all the stories that haven’t been told.