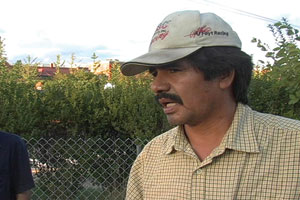 In July 2007, the board of supervisors of Prince William County, Virginia, passed a resolution that allowed police to check the immigration status of anyone they suspected of being undocumented. 9500 Liberty chronicles the ensuing battle between the county’s sizable Hispanic population and folks like the founder of the group Help Save Manassas, who casually compares immigrants to invading Huns. Drawn from footage that filmmakers Annabel Park and Eric Byler shot and posted in real time on YouTube, this moving film (named after the location of anti-racist murals) follows how this local controversy turned into a national Rorschach test for attitudes about immigration reform and race.

The film’s climax comes during a showdown at a 13-hour county meeting. White supporters of the resolution rail against crowded neighborhoods and soaring crime rates, and urge everyone, “Don’t ever forget 9/11.” Opponents, including the white police chief, argue that immigrants are vital, taxpaying members of the community. “Don’t confuse 9/11 with the 7-Eleven,” says one speaker. “The guys at the 7-Eleven just want to work.” After several months, the resolution was repealed, but Prince William’s immigrants had already gotten the message: Toward the end of the film we see empty storefronts and abandoned homes in what were once vibrant neighborhoods.