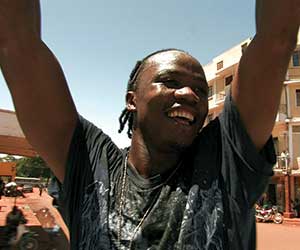 In 1986, six-year-old Kassim Ouma was abducted by Ugandan rebels and forced to become a child soldier. The guerrillas eventually took over the government (they remain in power today), and Ouma was obliged to remain in uniform. But when he was 19, he used a visa he obtained as a member of the army boxing team to defect to the United States, where he went on to become junior middleweight boxing champion of the world.

In this intimate documentary coproduced by Forest Whitaker, Ouma—nicknamed “The Dream” by a trainer because of his improbable story—is after far more than triumph in the ring. He wants to use his celebrity to recover what’s left of his life back home and help other child soldiers along the way. With vibrant color and a hip-hop score, coproducer and director Kief Davidson introduces us to a man of grace, agility, and childlike joy. He follows Ouma as he survives Rocky-esque bouts with bigger opponents; socializes with the Irish American manager whose family he adopts (“I’m black Irish,” Ouma quips); reunites his two sons in the States; and urges lawmakers to send more aid to Africa.

Now in his late 20s, what Ouma wants most is to go home—pardon in hand, since he’s still a deserter. His recollections gradually reveal just how charged any homecoming might be. The boxer’s buoyancy is eerily hard to reconcile with his memories of the horrors he once inflicted. It’s this disconnect that makes Kassim the Dream so poignant.