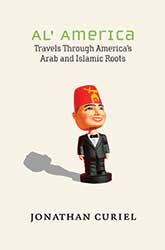 The Jerome Corsis of this world see a Muslim behind every bush, and according to Al’ America, they’re right! In the fine tradition of The Irish in America, Jonathan Curiel, a reporter for the San Francisco Chronicle, puts the usa through a sieve and sorts out Muslim influences on American culture.

Much of the colonization of America was made possible by Arab scholarship and innovation; Christopher Columbus relied heavily on the work of Arab astronomers and geographers. The Doors’ keyboardist Ray Manzarek tips his hat to “the Arabic, minor harmonic sense” that influenced his signature sound, and surf-rock legend Dick Dale tells Curiel that his megahit “Misirlou,” best known as the Pulp Fiction theme song, was “actually an Arabic song.” In his most engaging chapter, Curiel analyzes Elvis Presley’s near obsession with Lebanese-American poet Kahlil Gibran’s The Prophet—the King sought to produce a film version of the book, and a copy was found on his nightstand after his death.

Ultimately, Curiel predicts Arab culture will transcend even the post-9/11 climate of racism and stereotyping. “From its beginning, America intersected with Arab and Muslim culture, borrowing from it, admonishing it, fearing it, coexisting with it,” he writes. “The foundation of that legacy was undisturbed by 9/11.”