I haven’t paid a lot of attention to the outrage over Alabama’s closure of 31 driver license offices in 30 of its counties, but Bob Somerby says the prevailing liberal wisdom is a crock. The story is that Alabama closed offices in predominantly black counties as a way of making it harder for blacks to get driver licenses and thus making it harder for them to vote. (Alabama, naturally, has a photo ID requirement to vote.) But is that true?

Well, at great expense, the hardworking staff here totted up the black population of all 30 counties with closed offices. Here are the numbers:

For Alabama as a whole, the population is 26.2 percent black. So it looks like Somerby is right. The black population of the affected counties is actually lower than it is for the whole state. If Alabama was deliberately trying to target blacks, they sure seem to have made a hash of it.

POSTSCRIPT: There are other criticisms you can make, of course. Closing offices in small rural counties—many of which are majority black—makes it really hard to get a driver license since the nearest open office might be quite far away. At the same time, closing offices in places with very few people is also obviously sensible just in terms of constituent service. In any case, the overall impact doesn’t appear to be much heavier—if at all—on blacks than it is on whites. 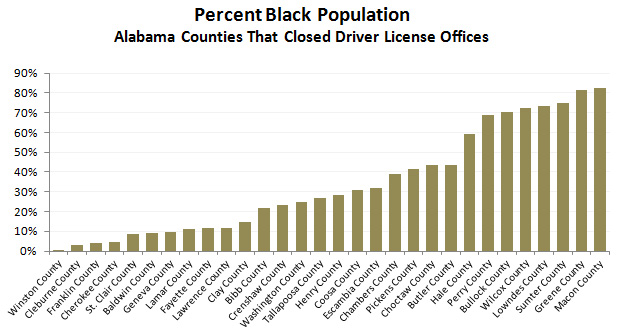