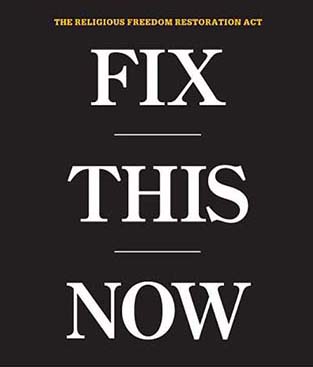 By the end of the day, the paper received a heartbreaking letter from Nick Crews of Plainfield. Crews writes about walking his dogs to the local market that morning to pick up two copies of the day’s Star, something he never does. He continues:

With the papers under my arm, I walked to Plainfield’s Maple Hill Cemetery, and found my brother’s grave. My brother, who had been a troubled Vietnam War vet, was gay at a time when being gay was a very difficult thing to be. When he died of AIDS in 1985 in a far-off city, his refuge from his closed-minded native state, some in our family were sufficiently ashamed that his cause of death was not discussed.

At the grave I opened the Star. I said, “Well, Charlie, times have changed, thank God. It turns out you were on the right side of history after all.” Then I read aloud as much of the paper’s editorial as tears would let me get through.

And today I’m doing what I never thought I’d do. I’m renewing my subscription to the Star. I’m doing this because, if for no other reason, I believe we must all support those who stand against discrimination and for inclusiveness. I do it too as thanks to the Star whose courage and right-mindedness on this issue made this moment of personal closure possible for me.