New York has been well run for 20 years. It used to be one of America’s most dangerous big cities; now it is one of the safest. Crime has fallen faster in the Big Apple than elsewhere, thanks to police reforms begun by Rudy Giuliani (the mayor from 1994 to 2002) and continued by Mike Bloomberg, his successor.

Can we please, please, please stop this? I almost don’t care anymore if you accept the hypothesis that reductions in childhood lead exposure are primarily responsible for America’s dramatic decline in violent crime over the past two decades. But can we at least get our facts straight? Lots of big cities have seen drops in their violent crime rate. At least three others—Chicago, Dallas and Los Angeles—have seen declines as big as New York’s. Others, like Phoenix and San Diego, now match New York’s crime rate. They did this without Giuliani and Bloomberg. They did it without CompStat. They did it without broken windows. Hell, even New York did it for four years without these things: Its crime rate started plummeting in 1991, long before these reforms showed up.

There’s a considerable controversy around all of these policing reforms, and my semi-informed belief is that they probably played a role in reducing crime. But honestly, the data simply doesn’t support the notion that they played a primary role. Neither the time frame nor the evidence from other cities fits. Rather, they rode the tailwind of something else—probably reduced childhood exposure to lead—and helped things along. Unless Bill de Blasio starts up a city program to seed the clouds with lead dust, he doesn’t really have anything to screw up. 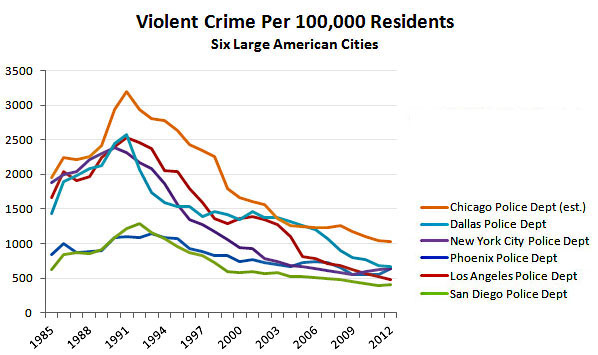