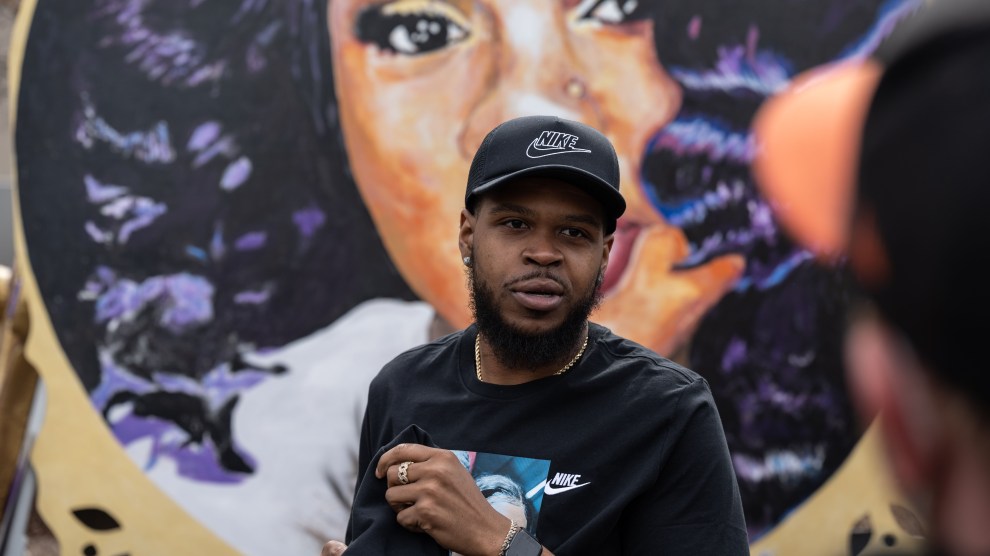 Kenneth Walker stands in front of a portrait of Breonna Taylor during a protest memorial for her in Louisville.Jon Cherry/Getty Images

A former police officer pleaded guilty this week for her role in the death of Breonna Taylor on March 13, 2020, when Louisville police fatally shot Taylor in her apartment. Three other officers are also facing federal charges.

For Kenneth Walker, Taylor’s boyfriend, the conviction of former Louisville Metro Police detective Kelly Goodlett felt “bittersweet,” he wrote in an op-ed in the Washington Post: “Justice has been a long time coming.”

In the two and a half years since Taylor’s death, Walker said he has struggled as government officials tried to blame him for what happened. He and Taylor, then a 26-year-old EMT, had been in bed when the police burst into her home under a no-knock warrant. Walker, believing they were intruders, fired a single shot toward them, and they returned gunfire, missing him but hitting Taylor multiple times.

“Moments after I held Bre as she died, the police arrested and charged me with attempted murder,” Walker wrote in the op-ed. He spent a couple of months in jail before the charges were dismissed. “Knowing all the problems that this failed raid would create, the Louisville police tried to use me as a scapegoat to deflect blame. It almost worked.”

On Tuesday, ex-detective Goodlett, who was not present during the raid, admitted that the police had obtained their warrant to raid Taylor’s home after lying to a judge about the evidence they possessed. Goodlett’s colleague Joshua Jaynes allegedly falsely claimed on a warrant application that he had proof that a drug dealer was sending packages to the apartment; police found no illicit substances there. “Now the police have begun to tell the truth—that the cops knew that they did not have probable cause to search Bre’s apartment,” Walker wrote. Goodlett pleaded guilty to conspiracy for her role in falsifying the warrant application.

During the months Walker spent in jail, he said he worried he might be convicted and sent to prison for the rest of his life, that “I might die” there, he wrote. After his release, he “sat shell-shocked and waited” for state prosecutors to charge the officers involved with Taylor’s death: “But instead of holding the officers responsible, Kentucky Attorney General Daniel Cameron told the world in September 2020 that it was my fault Bre died.”

In September 2020, state prosecutors declined to charge most of the officers involved, except for Brett Hankison, who was later acquitted for firing blindly into Taylor’s apartment and a neighboring apartment during the raid. Hankison now faces federal civil rights charges.

“Louisville police and local government officials made this about my (lawful) use of a firearm instead of their illegal conduct that led them to our doorstep,” Walker wrote.

Even if additional officers are held responsible for what happened, Taylor’s death will continue to haunt him, he says. “This case will follow me the rest of my life,” he wrote, adding that he still struggles to sleep at night as he recalls officers forcing Taylor’s door open. He said that since the police arrested him, strangers have also harassed him. “My mug shot has been shown all over the country. Even now, I am wrongly called a ‘thug’ and a ‘drug dealer’ by people I have never met,” he wrote. On a drive through Tennessee last year, he said an officer pulled him over for a traffic violation and saw that he had a prior charge of attempted murder of a police officer, from that night in Taylor’s home. Suddenly, more patrol cars pulled up, terrifying him. “I felt as helpless and afraid as I did on March 13, 2020.”

The Tennessee officers dispersed after Walker explained that his charges had been dismissed. But he remains shaken. “This is my life,” he wrote. “While I am grateful to have it, the nightmare continues.”